From Beaker to Solved 3-D Structure in Minutes

In a new study that one scientist called jaw-dropping, a joint UCLA/Caltech team has shown that it is possible to obtain the structures of small molecules, such as certain hormones and medications, in as little as 30 minutes. That's hours and even days less than was possible before.

The team used a technique called micro-electron diffraction (MicroED), which had been used in the past to learn the 3-D structures of larger molecules, specifically proteins. In this new study, the researchers show that the technique can be applied to small molecules, and that the process requires much less preparation time than expected. Unlike related techniques—some of which involve growing crystals the size of salt grains—this method, as the new study demonstrates, can work with run-of-the-mill starting samples, sometimes even powders scraped from the side of a beaker.

"We took the lowest-brow samples you can get and obtained the highest-quality structures in barely any time," says Caltech professor of chemistry Brian Stoltz, who is a co-author on the new study, published in the journal ACS Central Science. "When I first saw the results, my jaw hit the floor." Initially released on the pre-print server ChemRxiv in mid-October, the article has been viewed more than 35,000 times.

The reason the method works so well on small-molecule samples is that while the samples may appear to be simple powders, they actually contain tiny crystals, each roughly a billion times smaller than a speck of dust. Researchers knew about these hidden microcrystals before, but did not realize they could readily reveal the crystals' molecular structures using MicroED. "I don't think people realized how common these microcrystals are in the powdery samples," says Stoltz. "This is like science fiction. I didn't think this would happen in my lifetime—that you could see structures from powders."

This movie is an example of electron diffraction (MicroED) data collection, in which electrons are fired at a nanocrystal while being continuously rotated. Data from the movie are ultimately converted to a 3-D chemical structure. Credit: UCLA/Caltech
Image Lightbox

This movie is an example of electron diffraction (MicroED) data collection, in which electrons are fired at a nanocrystal while being continuously rotated. Data from the movie are ultimately converted to a 3-D chemical structure.
Credit: UCLA/Caltech
Download Full Image

The results have implications for chemists wishing to determine the structures of small molecules, which are defined as those weighing less than about 900 daltons. (A dalton is about the weight of a hydrogen atom.) These tiny compounds include certain chemicals found in nature, some biological substances like hormones, and a number of therapeutic drugs. Possible applications of the MicroED structure-finding methodology include drug discovery, crime lab analysis, medical testing, and more. For instance, Stoltz says, the method might be of use in testing for the latest performance-enhancing drugs in athletes, where only trace amounts of a chemical may be present.

"The slowest step in making new molecules is determining the structure of the product. That may no longer be the case, as this technique promises to revolutionize organic chemistry," says Robert Grubbs, Caltech's Victor and Elizabeth Atkins Professor of Chemistry and a winner of the 2005 Nobel Prize in Chemistry, who was not involved in the research. "The last big break in structure determination before this was nuclear magnetic resonance spectroscopy, which was introduced by Jack Roberts at Caltech in the late '50s."

Like other synthetic chemists, Stoltz and his team spend their time trying to figure out how to assemble chemicals in the lab from basic starting materials. Their lab focuses on such natural small molecules as the fungus-derived beta-lactam family of compounds, which are related to penicillins. To build these chemicals, they need to determine the structures of the molecules in their reactions—both the intermediate molecules and the final products—to see if they are on the right track.

One technique for doing so is X-ray crystallography, in which a chemical sample is hit with X-rays that diffract off its atoms; the pattern of those diffracting X-rays reveals the 3-D structure of the targeted chemical. Often, this method is used to solve the structures of really big molecules, such as complex membrane proteins, but it can also be applied to small molecules. The challenge is that to perform this method a chemist must create good-sized chunks of crystal from a sample, which isn't always easy. "I spent months once trying to get the right crystals for one of my samples," says Stoltz.

Another reliable method is NMR (nuclear magnetic resonance), which doesn't require crystals but does require a relatively large amount of a sample, which can be hard to amass. Also, NMR provides only indirect structural information.

Before now, MicroED—which is similar to X-ray crystallography but uses electrons instead of X-rays—was mainly used on crystallized proteins and not on small molecules. Co-author Tamir Gonen, an electron crystallography expert at UCLA who began developing the MicroED technique for proteins while at the Howard Hughes Medical Institute in Virginia, said that he only started thinking about using the method on small molecules after moving to UCLA and teaming up with Caltech.

"Tamir had been using this technique on proteins, and just happened to mention that they can sometimes get it to work using only powdery samples of proteins," says Hosea Nelson (PhD '13), an assistant professor of chemistry and biochemistry at UCLA. "My mind was blown by this, that you didn't have to grow crystals, and that's around the time that the team started to realize that we could apply this method to a whole new class of molecules with wide-reaching implications for all types of chemistry."

The team tested several samples of varying qualities, without ever attempting to crystallize them, and were able to determine their structures thanks to the samples' ample microcrystals. They succeeded in getting structures for ground-up samples of the brand-name drugs Tylenol and Advil, and they were able to identify distinct structures from a powdered mixture of four chemicals.

The UCLA/Caltech team says it hopes this method will become routine in chemistry labs in the future.

"In our labs, we have students and postdocs making totally new and unique molecular entities every day," says Stoltz. "Now we have the power to rapidly figure out what they are. This is going to change synthetic chemistry."

The study, "The CryoEM Method MicroED as a Powerful Tool for Small Molecule Structure Determination," was funded by the National Science Foundation, the National Institutes of Health, the Department of Energy, a Beckman Young Investigators award, a Searle Scholars award, a Pew Scholars award, the Packard Foundation, the Sloan Foundation, the Pew Charitable Trusts, and the Howard Hughes Medical Institute. Other co-authors include Christopher Jones,Michael Martynowycz, Johan Hattne, and Jose Rodriguez of UCLA; and Tyler Fulton of Caltech. 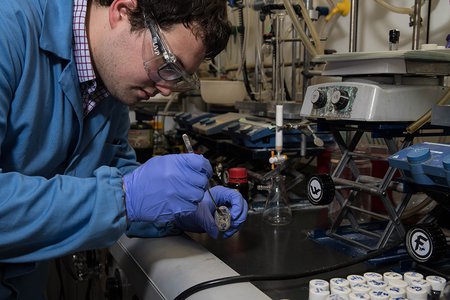 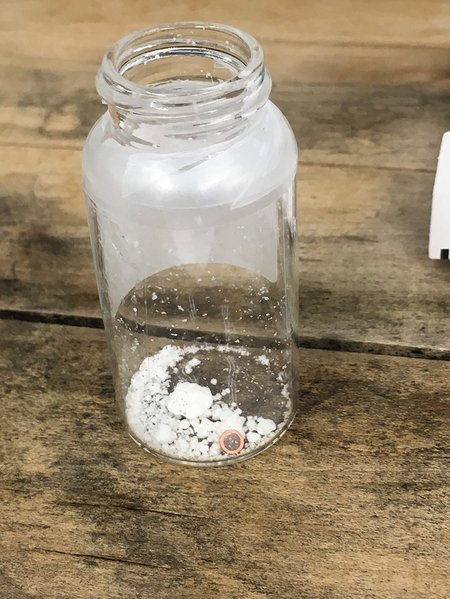 Close-up of a powder containing small molecules like those that gave rise to 3-D structures in the new study. (The copper piece is a sample holder used with microscopes.) Credit: Caltech/Stoltz Lab 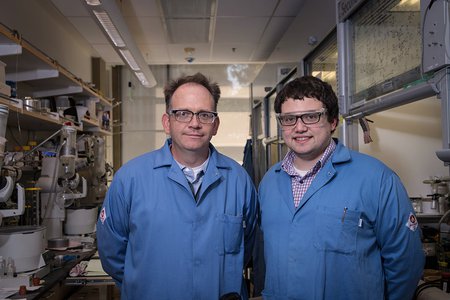 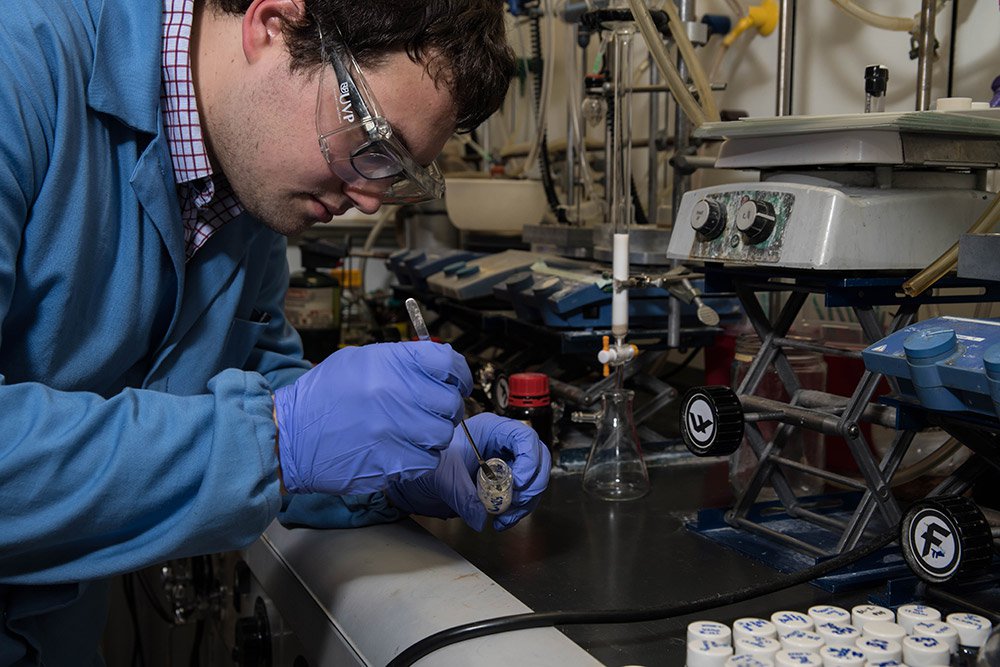 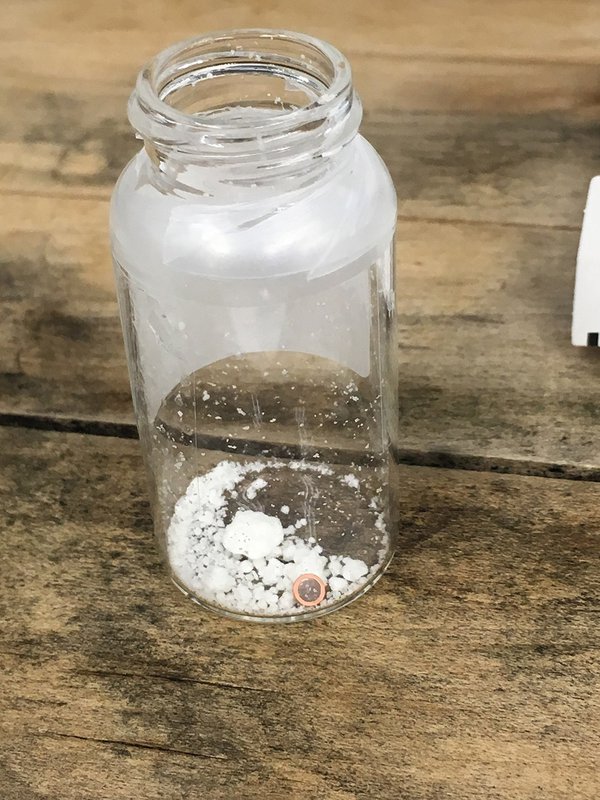 Close-up of a powder containing small molecules like those that gave rise to 3-D structures in the new study. (The copper piece is a sample holder used with microscopes.)
Credit: Caltech/Stoltz Lab
Download Full Image 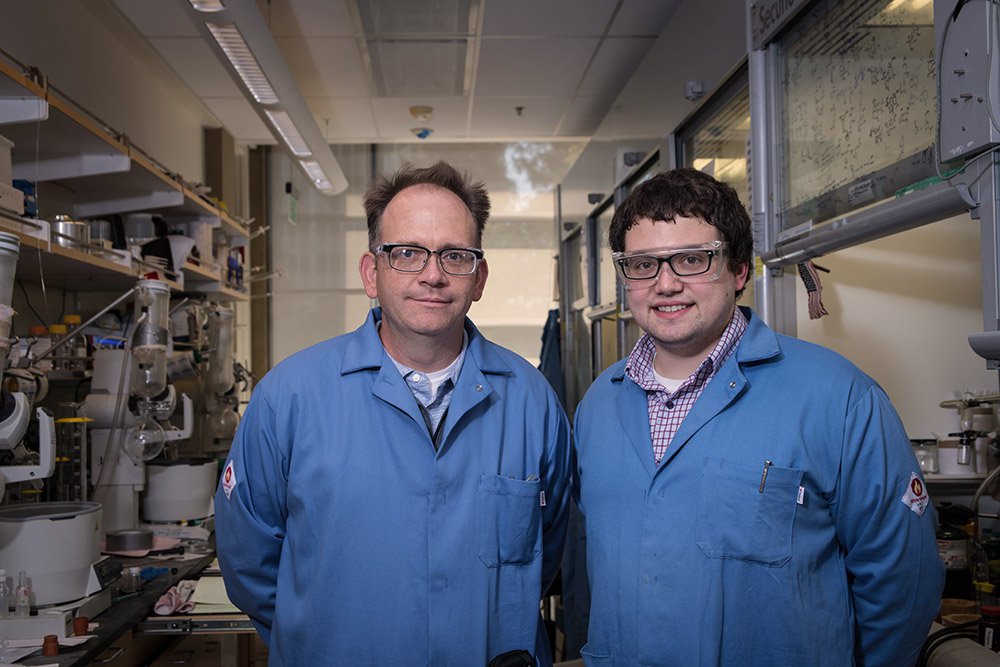