All of the cells in a particular tissue sample are not necessarily the same—they can vary widely in terms of genetic content, composition, and function. Yet many studies and analytical techniques aimed at understanding how biological systems work at the cellular level treat all of the cells in a tissue sample as identical, averaging measurements over the entire cellular population. It is easy to see why this happens. With the cell's complex matrix of organelles, signaling chemicals, and genetic material—not to mention its miniscule scale—zooming in to differentiate what is happening within each individual cell is no trivial task.

"But being able to do single-cell analysis is crucial to understanding a lot of biological systems," says Long Cai, assistant professor of chemistry at Caltech. "This is true in brains, in biofilms, in embryos . . . you name it."

Now Cai's lab has developed a method for simultaneously imaging and identifying dozens of molecules within individual cells. This technique could offer new insight into how cells are organized and interact with each other and could eventually improve our understanding of many diseases.

The imaging technique that Cai and his colleagues have developed allows researchers not only to resolve a large number of molecules—such as messenger RNA species (mRNAs)—within a single cell, but also to systematically label each type of molecule with its own unique fluorescent "bar code" so it can be readily identified and measured without damaging the cell.

"Using this technique, there is essentially no limit on how many different types of molecules you can detect within a single cell," explains Cai.

The new method uses an innovative sequential bar-coding scheme that takes fluorescence in situ hybridization (FISH), a well-known procedure for detecting specific sequences of DNA or RNA in a sample, to the next level. Cai and his colleagues have dubbed their technique FISH Sequential Coding anALYSis (FISH SCALYS).

FISH makes use of molecular probes—short fragments of DNA bound to fluorescent dyes, or fluorophores. These probes bind, or hybridize, to DNA or RNA with complementary sequences. When a hybridized sample is imaged with microscopy, the fluorophore lights up, pinpointing the target molecule's location.

There are a handful of fluorophores that can be used in these probes, and researchers typically use them to identify only a few different genes. For example, they will use a red dye to label all of the probes that target a specific type of mRNA. And when they image the sample, they will see a bunch of red dots in the cell. Then they will take another set of probes that target a different type of mRNA, label them with a blue fluorophore, and see glowing blue spots. And so on.

But what if a researcher wants to image more types of molecules than there are fluorophores? In the past, they have tried to mix the dyes together, making both red and blue probes for a particular gene, so that when both probes bind to the gene, the resulting dot would look purple. It was an imperfect solution and could still only label about 30 different types of molecules.

Cai's team realized that the same handful of fluorophores could be used in sequential rounds of hybridization to create thousands of unique fluorescent bar codes that could clearly identify many types of molecules (see graphic at right).

"With our technique, each tagged molecule remains just one single color in each round but we build up a bar code through multiple rounds, so the colors remain distinguishable. Using additional colors and extra rounds of hybridization, you can scale up easily to identify tens of thousands of different molecules," says Cai.

Cai says FISH SCALYS could be used to determine molecular identities of various types of cells, including embryonic stem cells. "One subset of genes will be turned on for one type of cell and off for another," he explains. It could also provide insight into the way that diseases alter cells, allowing researchers to compare the expression differences for a large number of genes in normal tissue versus diseased tissue.

Cai has recently been funded by the McKnight Endowment Fund for Neuroscience to adapt the technique to identify different types of neurons in samples from the hippocampus, a part of the brain associated with memory and learning.

Cai is also leading a program through Caltech's Beckman Institute that is helping other researchers on campus apply the imaging method to diverse biological questions.

Cai and his team describe the technique in a Nature Methods paper titled "Single-cell in situ RNA profiling by sequential hybridization." Caltech graduate student Eric Lubeck and postdoctoral scholar Ahmet Coskun are lead authors on the paper. Additional coauthors include Timur Zhiyentayev, a former Caltech graduate student, and Mubhij Ahmad, a former research technician in the Cai lab. The work has been funded by the National Institutes of Health's Single Cell Analysis Program. 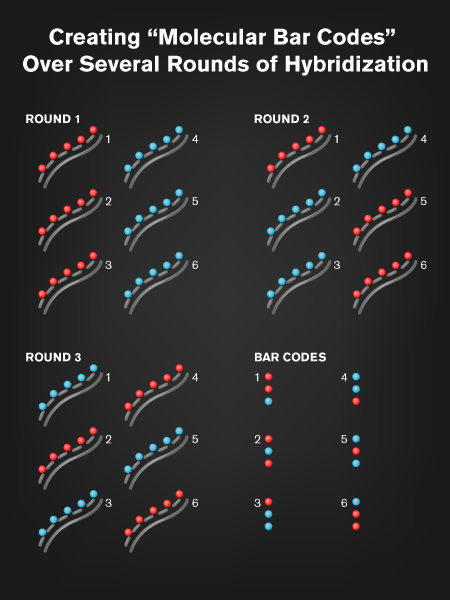 The sequential labeling technique allows researchers to unambiguously identify different molecules within a cell. In this simple example, six distinct mRNA molecules are labeled using only red and blue dyes. By changing the color of the dyes used to label the probes that target the various mRNA molecules in this way over three rounds of hybridization, a researcher could build up unique bar codes for each molecule. Credit: Lance Hayashida/Caltech 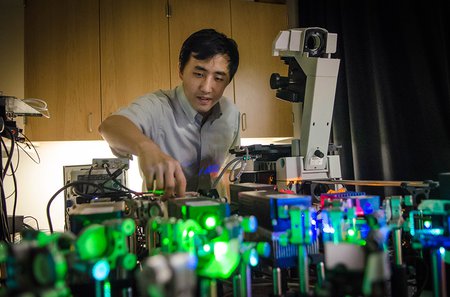 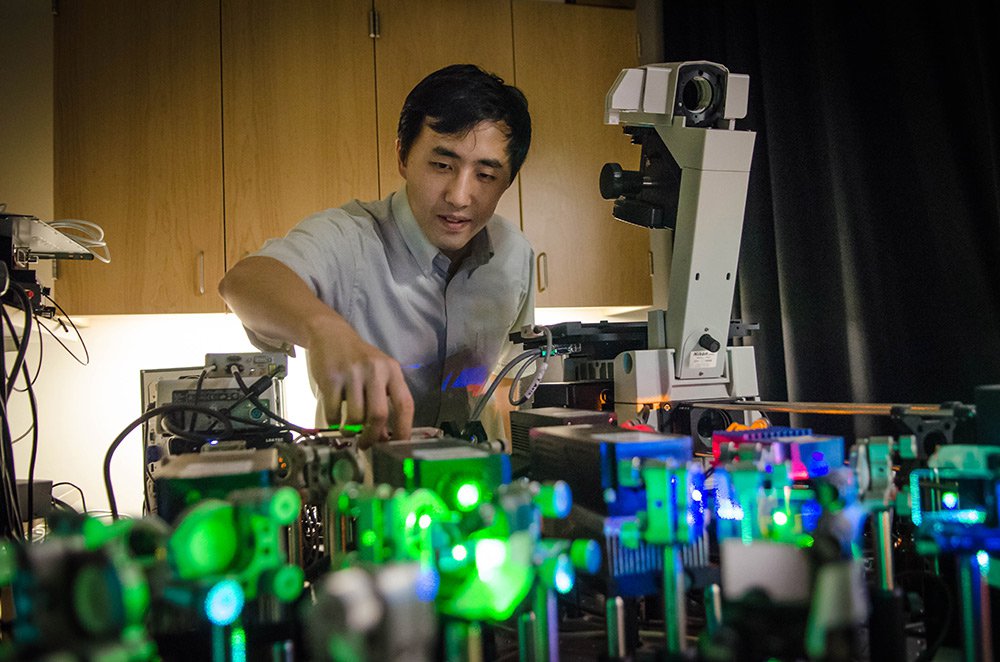