Roohi Dalal, a senior majoring in astrophysics and history, has received a Fulbright fellowship to travel to the Netherlands and study what the distribution of galaxies in space can tell us about fundamental properties of the universe.

The Fulbright Scholar Program, created by the U.S. Congress in 1946, is a cultural exchange program that offers grants to Americans who wish to perform research or pursue creative activities abroad. Over 150 countries are involved in the program, which sends approximately 1,200 Americans abroad each year.

At Leiden University in the Netherlands, Dalal will work with Alessandra Silvestri, a theoretical cosmologist, and postdoc Matteo Martinelli, to study how galaxies are distributed throughout the universe, and how this relates to fundamental questions in physics, such as how general relativity affects the universe on a grand scale. Dalal's research involves determining how to design galaxy surveys that can extract the most information about the nature of gravity at these large scales.

"I really like applying mathematical methods to these big, fundamental questions we're trying to answer," she says. "I think everyone wants to know where and how the universe started."

This will be Dalal's second trip to the Netherlands to conduct research. She spent two months last summer in an undergraduate research program, also at Leiden University.

"I really enjoyed it there," she says. "The research group environment was very collaborative, and I enjoyed living in Leiden, but I didn't feel like two months gave me a complete picture of life in the Netherlands. This is a great opportunity to be in a new environment, experience another culture, and learn how academia works in a different part of the world."

Dalal says her interest in astronomy began at a very early age.

"I grew up in New Hampshire, where the night sky was really beautiful because you could see a lot of stars," she says. "My parents got me a telescope and by first grade I decided I wanted to be an astronomer. Somehow, I stuck with it."

During her time at Caltech, Dalal has conducted research into dark matter and dark energy— as-yet-undetected forms of energy and matter believed to make up most of the universe—with the "Dark Sector" research group at JPL, which Caltech manages for NASA. She is currently working on a project with Olivier Doré, a visiting associate in theoretical astrophysics, and Roland de Putter, a senior postdoctoral scholar studying theoretical and observational cosmology.

After her fellowship, Dalal will attend graduate school at Princeton University where she will pursue a doctoral degree, supported by a grant from the National Science Foundation Graduate Research Fellowships Program. She hopes to then work in academia as a faculty member at a research institution. 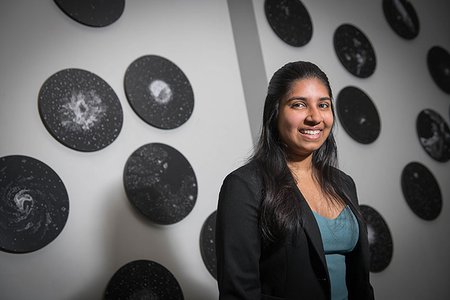 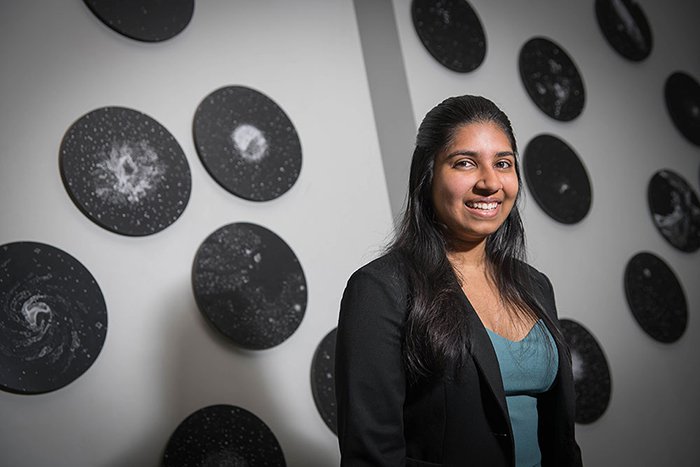