Generating and storing renewable energy, such as solar or wind power, is a key barrier to a clean-energy economy. When the Joint Center for Artificial Photosynthesis (JCAP) was established at Caltech and its partnering institutions in 2010, the U.S. Department of Energy (DOE) Energy Innovation Hub had one main goal: a cost-effective method of producing fuels using only sunlight, water, and carbon dioxide, mimicking the natural process of photosynthesis in plants and storing energy in the form of chemical fuels for use on demand. Over the past five years, researchers at JCAP have made major advances toward this goal, and they now report the development of the first complete, efficient, safe, integrated solar-driven system for splitting water to create hydrogen fuels.

"This result was a stretch project milestone for the entire five years of JCAP as a whole, and not only have we achieved this goal, we also achieved it on time and on budget," says Caltech's Nate Lewis, George L. Argyros Professor and professor of chemistry, and the JCAP scientific director.

The new solar fuel generation system, or artificial leaf, is described in the August 27 online issue of the journal Energy and Environmental Science. The work was done by researchers in the laboratories of Lewis and Harry Atwater, director of JCAP and Howard Hughes Professor of Applied Physics and Materials Science.

"This accomplishment drew on the knowledge, insights and capabilities of JCAP, which illustrates what can be achieved in a Hub-scale effort by an integrated team," Atwater says. "The device reported here grew out of a multi-year, large-scale effort to define the design and materials components needed for an integrated solar fuels generator."

The new system consists of three main components: two electrodes—one photoanode and one photocathode—and a membrane. The photoanode uses sunlight to oxidize water molecules, generating protons and electrons as well as oxygen gas. The photocathode recombines the protons and electrons to form hydrogen gas. A key part of the JCAP design is the plastic membrane, which keeps the oxygen and hydrogen gases separate. If the two gases are allowed to mix and are accidentally ignited, an explosion can occur; the membrane lets the hydrogen fuel be separately collected under pressure and safely pushed into a pipeline.

Semiconductors such as silicon or gallium arsenide absorb light efficiently and are therefore used in solar panels. However, these materials also oxidize (or rust) on the surface when exposed to water, so cannot be used to directly generate fuel. A major advance that allowed the integrated system to be developed was previous work in Lewis's laboratory, which showed that adding a nanometers-thick layer of titanium dioxide (TiO2)—a material found in white paint and many toothpastes and sunscreens—onto the electrodes could prevent them from corroding while still allowing light and electrons to pass through. The new complete solar fuel generation system developed by Lewis and colleagues uses such a 62.5-nanometer-thick TiO2 layer to effectively prevent corrosion and improve the stability of a gallium arsenide–based photoelectrode.

Another key advance is the use of active, inexpensive catalysts for fuel production. The photoanode requires a catalyst to drive the essential water-splitting reaction. Rare and expensive metals such as platinum can serve as effective catalysts, but in its work the team discovered that it could create a much cheaper, active catalyst by adding a 2-nanometer-thick layer of nickel to the surface of the TiO2. This catalyst is among the most active known catalysts for splitting water molecules into oxygen, protons, and electrons and is a key to the high efficiency displayed by the device.

The photoanode was grown onto a photocathode, which also contains a highly active, inexpensive, nickel-molybdenum catalyst, to create a fully integrated single material that serves as a complete solar-driven water-splitting system.

A critical component that contributes to the efficiency and safety of the new system is the special plastic membrane that separates the gases and prevents the possibility of an explosion, while still allowing the ions to flow seamlessly to complete the electrical circuit in the cell. All of the components are stable under the same conditions and work together to produce a high-performance, fully integrated system. The demonstration system is approximately one square centimeter in area, converts 10 percent of the energy in sunlight into stored energy in the chemical fuel, and can operate for more than 40 hours continuously.

"This new system shatters all of the combined safety, performance, and stability records for artificial leaf technology by factors of 5 to 10 or more ," Lewis says.

"Our work shows that it is indeed possible to produce fuels from sunlight safely and efficiently in an integrated system with inexpensive components," Lewis adds, "Of course, we still have work to do to extend the lifetime of the system and to develop methods for cost-effectively manufacturing full systems, both of which are in progress."

Because the work assembled various components that were developed by multiple teams within JCAP, coauthor Chengxiang Xiang, who is co-leader of the JCAP prototyping and scale-up project, says that the successful end result was a collaborative effort. "JCAP's research and development in device design, simulation, and materials discovery and integration all funneled into the demonstration of this new device," Xiang says.

These results are published in a paper titled "A monolithically integrated, intrinsically safe, 10% efficient, solar-driven water-splitting system based on active, stable earth-abundant electrocatalysts in conjunction with tandem III-V light absorbers protected by amorphous TiO2 films." In addition to Lewis, Atwater, and Xiang, other Caltech coauthors include graduate student Erik Verlage, postdoctoral scholars Shu Hu and Ke Sun, material processing and integration research engineer Rui Liu, and JCAP mechanical engineer Ryan Jones. Funding was provided by the Office of Science at the U.S. Department of Energy, and the Gordon and Betty Moore Foundation. 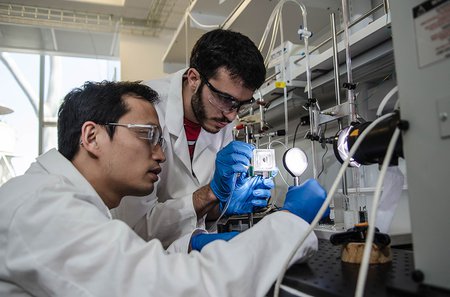 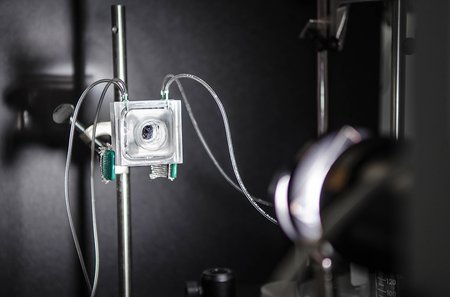 A highly efficient photoelectrochemical (PEC) device uses the power of the sun to split water into hydrogen and oxygen. The stand-alone prototype includes two chambers separated by a semi-permeable membrane that allows collection of both gas products. Credit: Lance Hayashida/Caltech 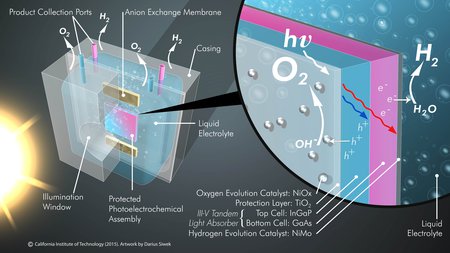 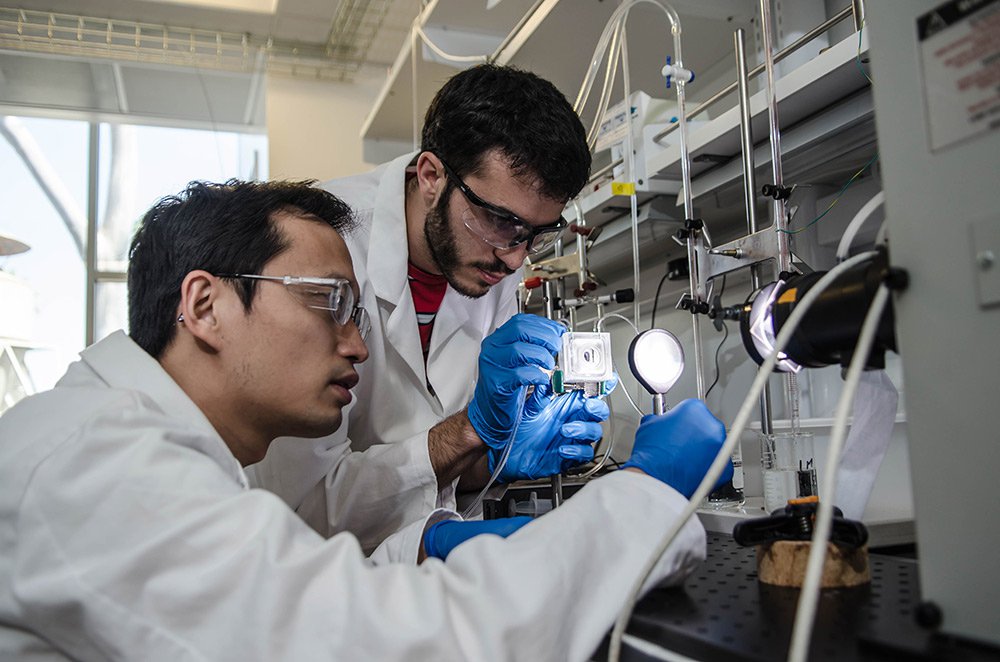 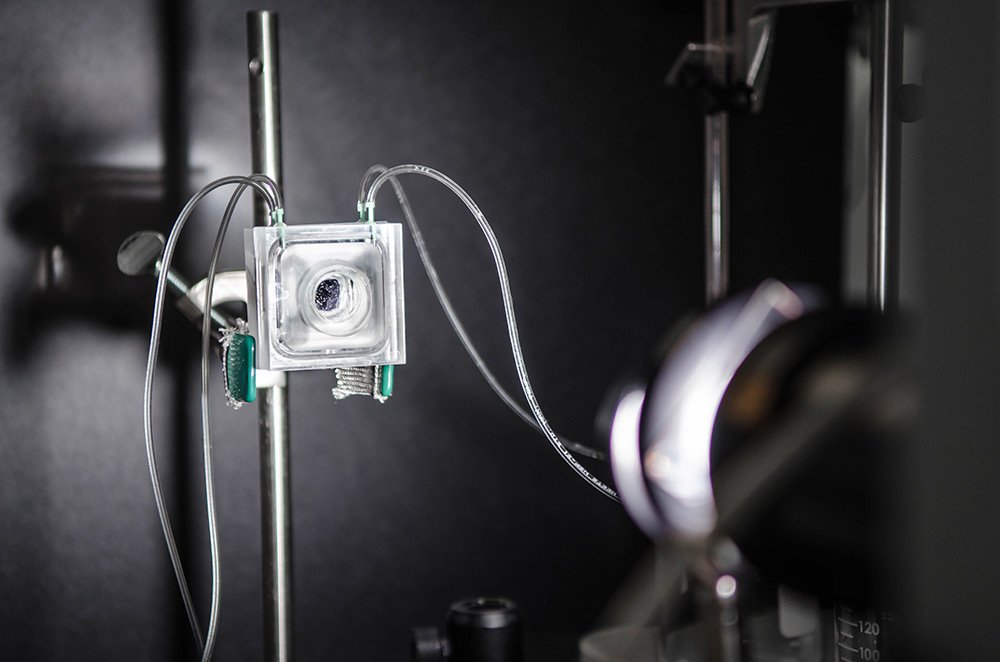 A highly efficient photoelectrochemical (PEC) device uses the power of the sun to split water into hydrogen and oxygen. The stand-alone prototype includes two chambers separated by a semi-permeable membrane that allows collection of both gas products.
Credit: Lance Hayashida/Caltech
Download Full Image 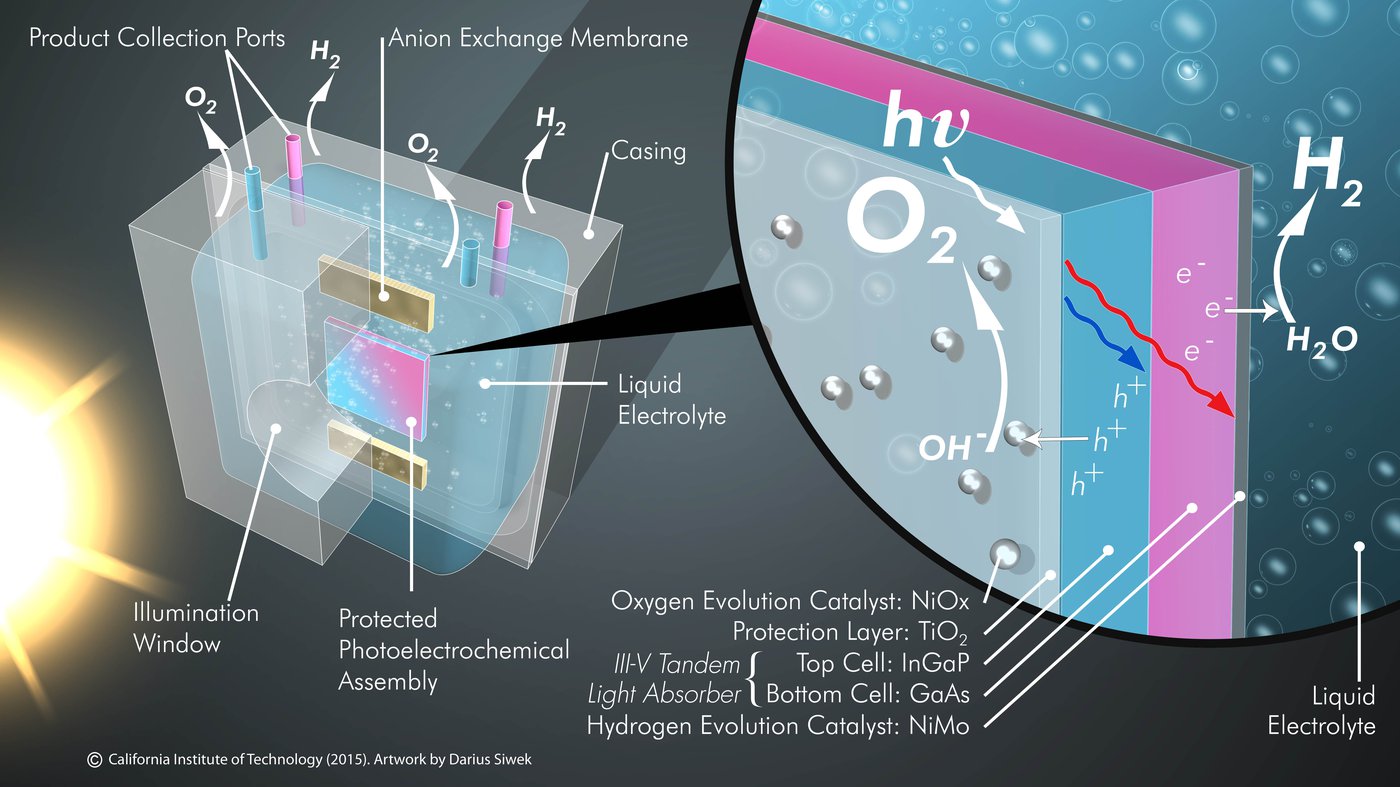