An Archimedes Revival in Pasadena

It is a banner spring in Pasadena for the classical Greek mathematician Archimedes of Syracuse. Exhibits at Caltech and the Huntington Library highlight the work of Archimedes, as it has made its way into the modern era. Lectures and conferences will complement the exhibits, helping viewers understand the historical and scientific significance of ancient Greek mathematics to later eras.

"Archimedes and the Recovery of Greek Mathematics," the exhibit at Caltech, begins April 7, 2014, and runs through the end of July. It is located on the second floor of the Parsons-Gates Hall of Administration.

The collection on display at Caltech comes from the collection of rare books in the Caltech Archives and is curated by Shelley Erwin, head of archives and special collections. The exhibit consists mainly of European editions, dating from the 16th through 18th centuries, of the work of Archimedes and other ancient Greek mathematicians. The first printed edition of the complete known works of Archimedes, released in 1544 in parallel Greek and Latin texts, will be on display, as will the first English translation of Euclid's Elements, published in 1570.

Noel Swerdlow, visiting associate in history at Caltech, will lecture on "The Recovery and Application of Greek Mathematics in the Renaissance and Early Modern Period" at the Beckman Institute auditorium on April 10, 2014, at 4:00 p.m. Swerdlow will select texts from the Caltech exhibit to illustrate how the work of Archimedes and others influenced early modern scientists such as Isaac Newton, Galileo Galilei, and Johannes Kepler. He will review exhibit texts such as the 16th-century Italian editions of Euclid and Archimedes that Galileo read during his student years, and the 1621 edition of Diophantus's Arithmetica, famous because in his copy of the text, now lost, French mathematician Pierre de Fermat wrote a note that he had "a marvelous proof" that could not be contained in the margin. Known as Fermat's last conjecture, this theorem was supposed to demonstrate that although Diophantus had shown that a square could be divided into two squares, Fermat could prove that a cube, or fourth power, or any power higher than a square cannot be divided into two powers of the same kind. "The consensus," says Swerdlow, "which must be correct, is that there was something wrong with Fermat's proof"—the one he did not write down. Fermat's last conjecture was not in fact proved until 1994 by British mathematician Andrew Wiles, who needed over 100 pages to achieve this feat.

Swerdlow's special interest is in the history of mathematical astronomy, a field that blossomed in Europe in the 16th and 17th centuries as early modern scientists drew on ancient Greek mathematics to pioneer Copernicus's heliocentric view of the universe. In his lecture, Swerdlow will describe the beginning of the recovery of Greek mathematics, found in an "Oration on the Dignity and Utility of the Mathematical Sciences," delivered by Johannes Regiomontanus in Padua in 1464. Swerdlow will discuss how proofs developed by Euclid were used by Galileo to explain why objects do not fly off the earth as it rotates and by Newton to explain centripetal force, and will show how Kepler used propositions by Archimedes and Apollonius to demonstrate that the orbits of planets are ellipses.

The inspiration for the Archimedes exhibit and Swerdlow's lecture at Caltech is the display of the famous Archimedes palimpsest at the Huntington from March 15 to June 22, 2014. This, the oldest surviving copy of Archimedes's work, contains one treatise not found elsewhere and one previously known only in Latin translation. The text was copied by an anonymous scribe in 10th-century Constantinople. Three hundred years later, a monk washed the ink from the parchment, rotated the sheets 90 degrees, and inked a liturgical text over the faded remnants of Archimedes's text, a common procedure in an era when writing materials were scarce.

The book was used for hundreds of years at the Monastery of Saint Sabas outside Jerusalem, and eventually found its way to the Metochion in Constantinople. There, in the mid 19th century, Archimedes's text, barely visible under the words of the prayer book, was first detected. Fifty years later, Johann Heiberg, a Danish classicist and editor of Greek mathematical texts, examining the text through a magnifying glass, recovered and published the treatises.

During World War I, the palimpsest went missing from its home in Constantinople. It surfaced briefly in the 1930s when a bookseller in Paris attempted unsuccessfully to sell it to various museums and libraries, including the Huntington. For the next 60 years, the palimpsest was treated poorly, for when it surfaced again in the 1990s and was auctioned off by Christie's, it was covered in mold, singed by fire, and had been inexpertly rebound with glue.

The palimpsest was purchased in 1998 by an anonymous American collector who immediately sought help for the text's restoration from the Walters Art Museum in Baltimore, near where he lived. It took four years to disbind the book and then several more years of imaging processes to reveal the ghostly ink of Archimedes's treatises under the liturgical text. Scientists with the Stanford Synchrotron Radiation Laboratory used accelerator technology to make visible the text beneath four forged religious paintings that were apparently added in the 20th century in the hopes of increasing the book's market value.

The previously unknown texts discovered in the palimpsest are the Method, in which Archimedes shows how several of his principal discoveries were first investigated before being rigorously proved, and the Greek text of On Floating Bodies, which prior to the discovery of the Archimedes palimpsest was known completely only in a Latin translation from the 13th century. In addition, the Archimedes palimpsest includes a partial description of a puzzle called the Stomachion, also known from Latin and Arabic sources. In the puzzle, a square is cut into 14 pieces that can be reassembled in many different ways (according to a modern solution, the total number of ways is 17,152).

The Huntington is offering a curated tour of the Archimedes exhibit on April 17 at 4:30 p.m., and a lecture on the Archimedes palimpsest and its restoration on May 22 at 7:30 p.m., followed by a one-day symposium on Archimedes on May 23. 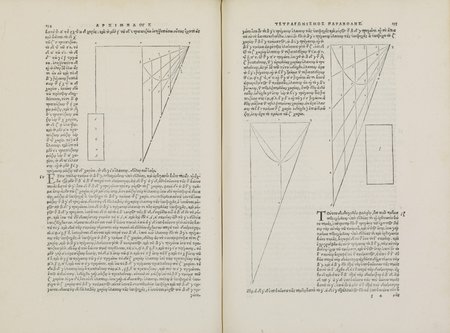 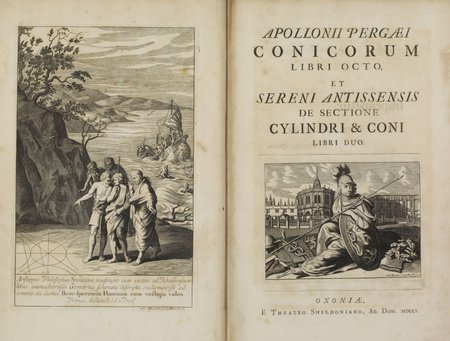 Apollonius, Conics, and Serenus, On the Section of the Cylinder and Cone, edited and translated by Edmond Halley, Oxford, 1710. The frontispiece shows the famous event described in Vitruvius, On Architecture VI, which reads: Aristippus, the Socratic Philosopher, shipwrecked by a storm on the coast of Rhodes, when he noticed carefully drawn geometrical figures, it is said that he cried out to his companions, "We may have good hope for I perceive the signs of men." 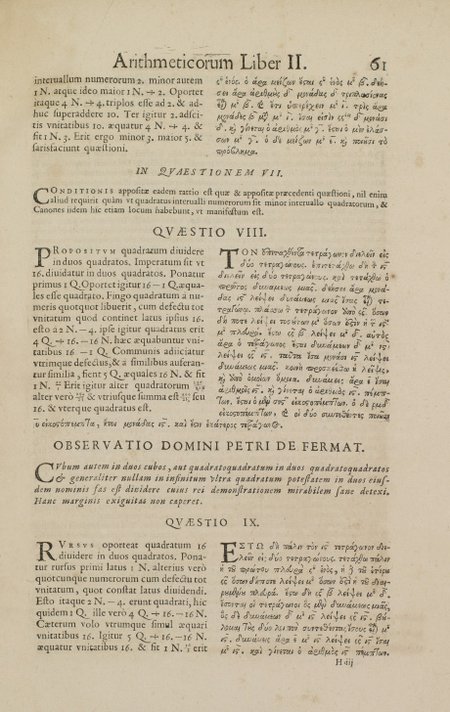 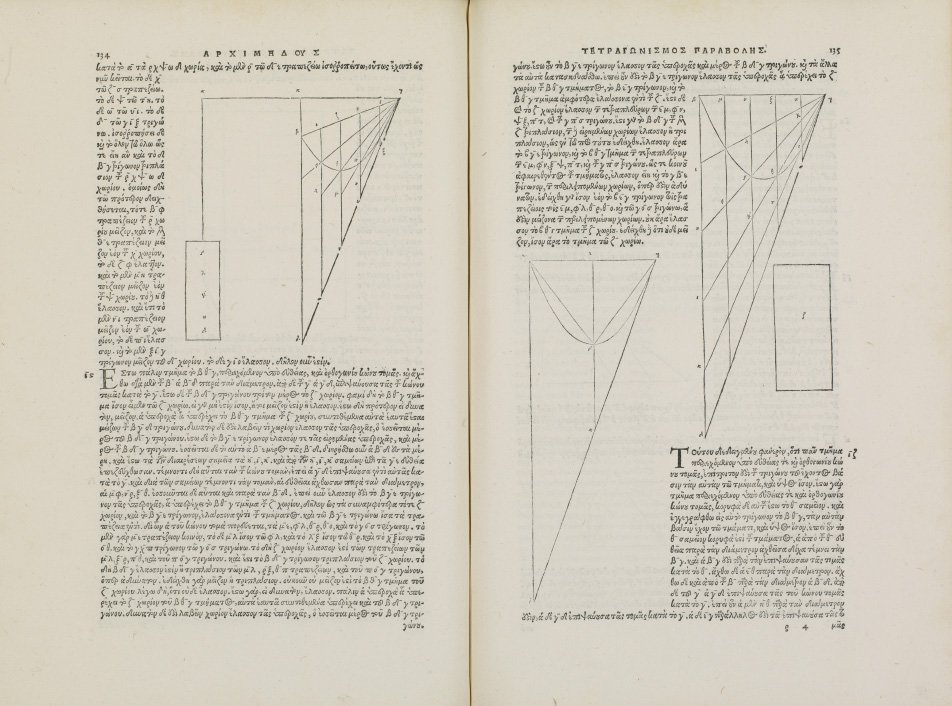 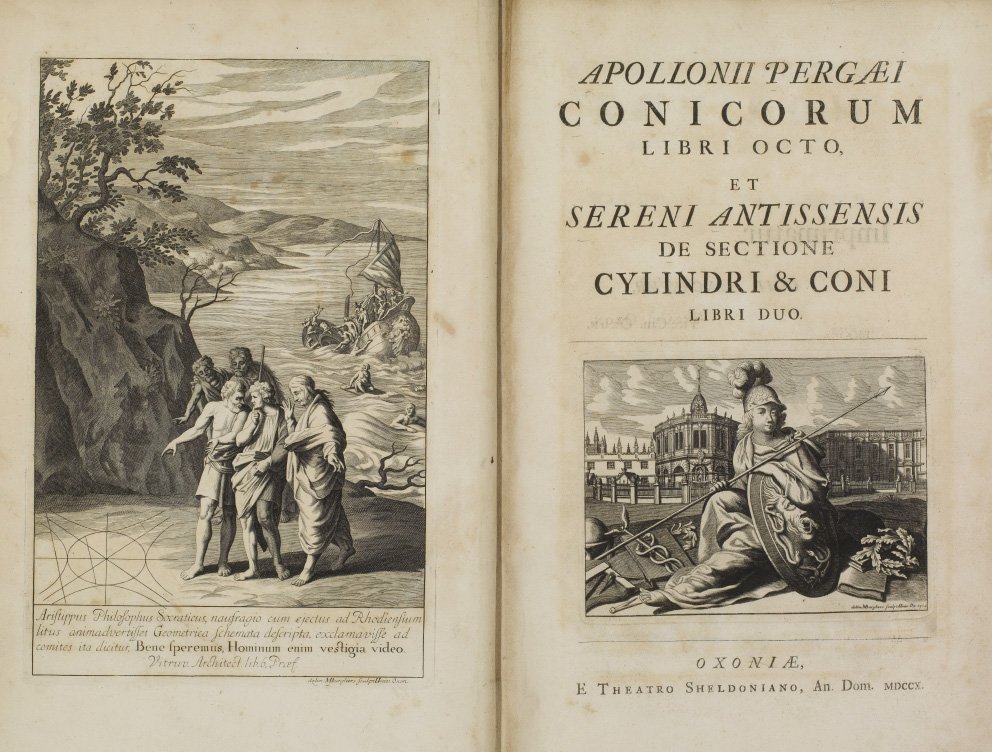 Apollonius, Conics, and Serenus, On the Section of the Cylinder and Cone, edited and translated by Edmond Halley, Oxford, 1710. The frontispiece shows the famous event described in Vitruvius, On Architecture VI, which reads: Aristippus, the Socratic Philosopher, shipwrecked by a storm on the coast of Rhodes, when he noticed carefully drawn geometrical figures, it is said that he cried out to his companions, "We may have good hope for I perceive the signs of men."
Download Full Image 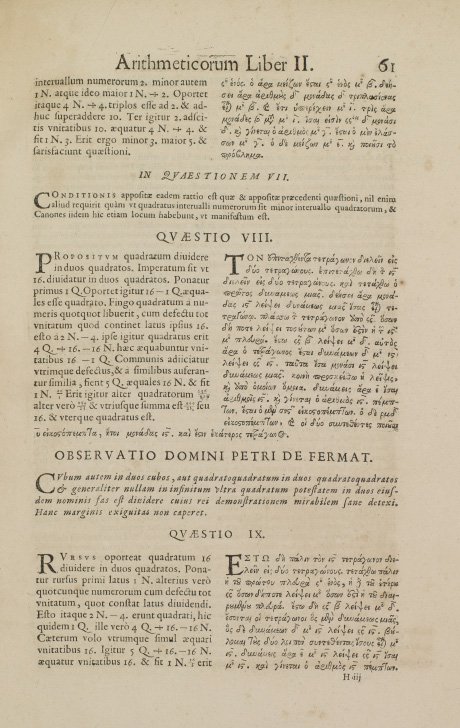