An Antibody That Can Attack HIV in New Ways

Proteins called broadly neutralizing antibodies (bNAbs) are a promising key to the prevention of infection by HIV, the virus that causes AIDS. bNAbs have been found in blood samples from some HIV patients whose immune systems can naturally control the infection. These antibodies may protect a patient's healthy cells by recognizing a protein called the envelope spike, present on the surface of all HIV strains and inhibiting, or neutralizing, the effects of the virus. Now Caltech researchers have discovered that one particular bNAb may be able to recognize this signature protein, even as it takes on different conformations during infection—making it easier to detect and neutralize the viruses in an infected patient.

The work, from the laboratory of Pamela Bjorkman, Centennial Professor of Biology, was published in the September 10 issue of the journal Cell.

The process of HIV infection begins when the virus comes into contact with human immune cells called T cells that carry a particular protein, CD4, on their surface. Three-part (or "trimer") proteins called envelope spikes on the surface of the virus recognize and bind to the CD4 proteins. The spikes can be in either a closed or an open conformation, going from closed to open when the spike binds to CD4. The open conformation then triggers fusion of the virus with the target cell, allowing the HIV virus to deposit its genetic material inside the host cell, forcing it to become a factory for making new viruses that can go on to infect other cells.

The bNAbs recognize the envelope spike on the surface of HIV, and most known bNAbs only recognize the spike in the closed conformation. Although the only target of neutralizing antibodies is the envelope spike, each bNAb actually functions by recognizing just one specific target, or epitope, on this protein. Some targets allow more effective neutralization of the virus, and, therefore, some bNAbs are more effective against HIV than others. In 2014, Bjorkman and her collaborators at Rockefeller University reported initial characterization of a potent bNAb called 8ANC195 in the blood of HIV patients whose immune systems could naturally control their infections. They also discovered that this antibody could neutralize the HIV virus by targeting a different epitope than any other previously identified bNAb.

In the work described in the recent Cell paper, they investigated how 8ANC195 functions—and how its unique properties could be beneficial for HIV therapies.

"In Pamela's lab we use X-ray crystallography and electron microscopy to study protein–protein interactions on a molecular level," says Louise Scharf, a postdoctoral scholar in Bjorkman's laboratory and the first author on the paper. "We previously were able to define the binding site of this antibody on a subunit of the HIV envelope spike, so in this study we solved the three-dimensional structure of this antibody in complex with the entire spike, and showed in detail exactly how the antibody recognizes the virus."

The most common form of HIV infection is when a virus in the bloodstream attaches to a T cell and infects the cell. In this instance, the spikes on the free-floating virus would be predominantly in the closed conformation until they made contact with the host cell. Most bNAbs could neutralize this virus. However, HIV also can spread directly from one cell to another. In this case, because the antibody already is attached to the host cell, the spike is in an open conformation. But 8ANC195 could still recognize and attach to it.

A potential medical application of this antibody is in so-called combination therapies, in which a patient is given a cocktail of several antibodies that work in different ways to fight off the virus as it rapidly changes and evolves. "Our collaborators at Rockefeller have studied this extensively in animal models, showing that if you administer a combination of these antibodies, you greatly reduce how much of the virus can escape and infect the host," Scharf says. "So 8ANC195 is one more antibody that we can use therapeutically; it targets a different epitope than other potent antibodies, and it has the advantage of being able to recognize these multiple conformations."

The idea of bNAb therapeutics might not be far from a clinical reality. Scharf says that the same collaborators at Rockefeller University are already testing bNAbs in a human treatment in a clinical trial. Although the initial trial will not include 8ANC195, the antibody may be included in a combination therapy trial in the near future, Scharf says.

Furthermore, the availability of complete information about how 8ANC195 binds to the viral spike will allow Scharf, Bjorkman, and their colleagues to begin engineering the antibody to be more potent and able to recognize more strains of HIV.

"In addition to supporting the use of 8ANC195 for therapeutic applications, our structural studies of 8ANC195 have revealed an unanticipated new conformation of the HIV envelope spike that is relevant to understanding the mechanism by which HIV enters host cells and bNAbs inhibit this process," Bjorkman says.

These results were published in a journal article titled "Broadly Neutralizing Antibody 8ANC195 Recognizes Closed and Open States of HIV-1 Env." In addition to Scharf and Bjorkman, other Caltech coauthors include graduate student Haoqing Wang, research technician Han Gao, research scientist Songye Chen, and Beckman Institute resource director Alasdair W. McDowall. Funding for the work was provided by the National Institute of Allergy and Infectious Diseases of the National Institutes of Health; the Bill and Melinda Gates Foundation; and the American Cancer Society. Crystallography and electron microscopy were done at the Molecular Observatory at Caltech, supported by the Gordon and Betty Moore Foundation. 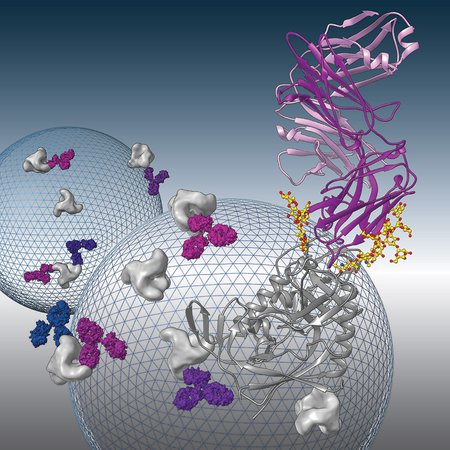 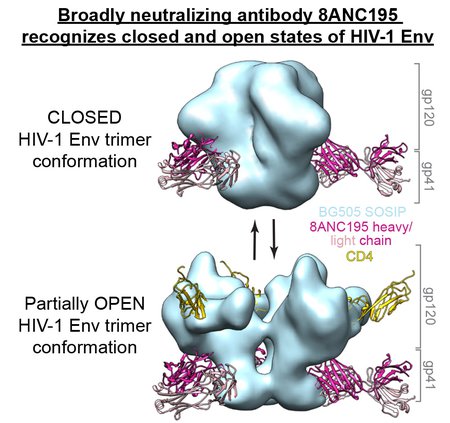 Structural analysis of the patient-derived antibody 8ANC195 uncovers a previously-unseen conformation of the HIV-1 envelope protein (Env) and suggests that 8ANC195 partially closes the envelope trimer when it is engaged with the host receptor on human cells. The closed (top panel) and open (bottom panel) structures of HIV-1 Env (consisting of gp120 and gp41 subunits, blue) are shown as surfaces. The antibody (8ANC195, pink) and host receptor (CD4, yellow) are shown as ribbon diagrams. Credit: Louise Scharf/Caltech
Image Gallery Lightbox 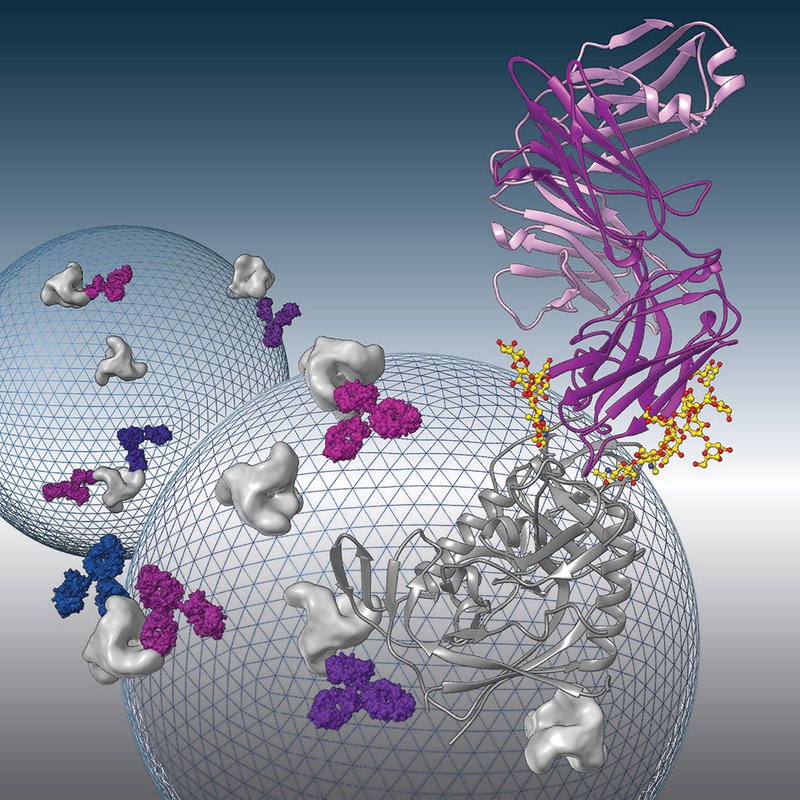 Broadly neutralizing antibodies to HIV-1 envelope glycoprotein are being evaluated as therapeutics to prevent or treat HIV-1 infection. Structural analysis of one such antibody, 8ANC195, revealed a new conformation of the envelope protein. The image shows the X-ray crystal structure of 8ANC195 in complex with the gp120 subunit of the envelope protein. The background shows schematic representations of HIV-1 virus particles studded with envelope proteins being recognized by 8ANC195 antibodies.
Credit: Louise Scharf/Caltech
Download Full Image 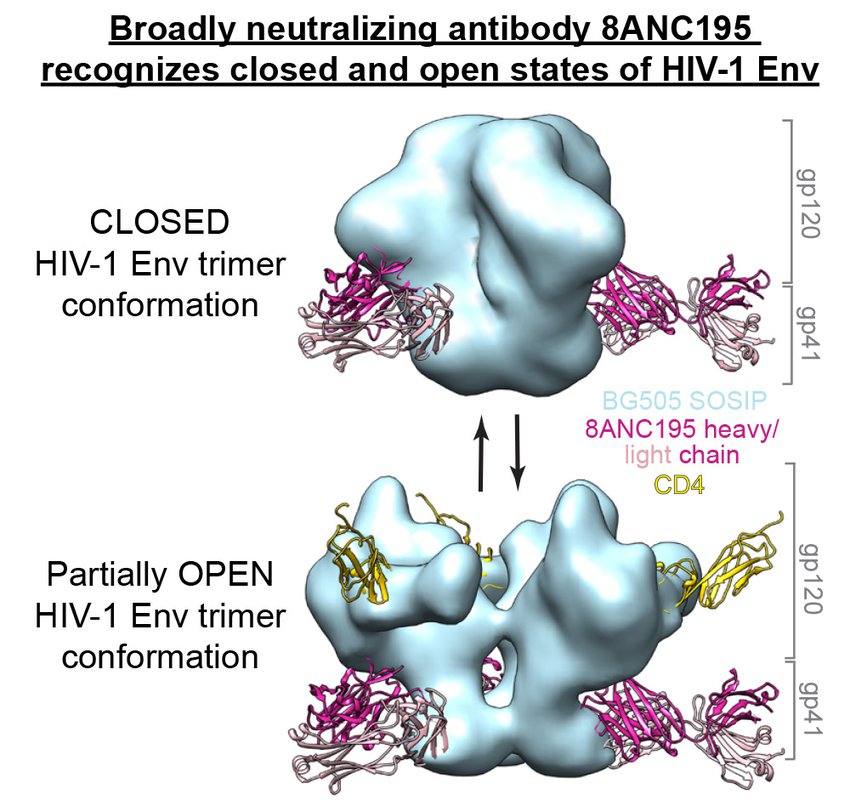 Structural analysis of the patient-derived antibody 8ANC195 uncovers a previously-unseen conformation of the HIV-1 envelope protein (Env) and suggests that 8ANC195 partially closes the envelope trimer when it is engaged with the host receptor on human cells. The closed (top panel) and open (bottom panel) structures of HIV-1 Env (consisting of gp120 and gp41 subunits, blue) are shown as surfaces. The antibody (8ANC195, pink) and host receptor (CD4, yellow) are shown as ribbon diagrams.
Credit: Louise Scharf/Caltech
Download Full Image