Due to its well-studied genome and small size, the humble fruit fly has been used as a model to study hundreds of human health issues ranging from Alzheimer's to obesity. However, Michael Dickinson, Esther M. and Abe M. Zarem Professor of Bioengineering at Caltech, is more interested in the flies themselves—and how such tiny insects are capable of something we humans can only dream of: autonomous flight. In a report on a recent study that combined bursts of air, digital video cameras, and a variety of software and sensors, Dickinson and his team explain a mechanism for the insect's "cruise control" in flight—revealing a relationship between a fly's vision and its wind-sensing antennae.

The results were recently published in an early online edition of the Proceedings of the National Academy of Sciences.

Inspired by a previous experiment from the 1980s, Dickinson's former graduate student Sawyer Fuller (PhD '11) wanted to learn more about how fruit flies maintain their speed in flight. "In the old study, the researchers simulated natural wind for flies in a wind tunnel and found that flies maintain the same groundspeed—even in a steady wind," Fuller says.

Because the previous experiment had only examined the flies' cruise control in gentle steady winds, Fuller decided to test the limits of the insect's abilities by delivering powerful blasts of air from an air piston in a wind tunnel. The brief gusts—which reached about half a meter per second and moved through the tunnel at the speed of sound—were meant to probe how the fly copes if the wind is rapidly changing.

The flies' response to this dynamic stimulus was then tracked automatically by a set of five digital video cameras that recorded the fly's position from five different perspectives. A host of computers then combined information from the cameras and instantly determined the fly's trajectory and acceleration.

To their surprise, the Caltech team found that the flies in their experiments, unlike those in the previous studies, accelerated when the wind was pushing them from behind and decelerated when flying into a headwind. In both cases the flies eventually recovered to maintain their original groundspeed, but the initial response was puzzling, Fuller says. "This response was basically the opposite of what the fly would need to do to maintain a consistent groundspeed in the wind," he says.

In the past, researchers assumed that flies—like humans and most other animals—used their vision to measure their speed in wind, accelerating and decelerating their flight based on the groundspeed their vision detected. But Fuller and his colleagues were also curious about the in-flight role of the fly's wind-sensing organs: the antennae.

Using the fly's initial response to strong wind gusts as a marker, the researchers tested the response of each sensory mode individually. To investigate the role of wind sensation on the fly's cruise control, they delivered strong gusts of wind to normal flies, as well as flies whose antennae had been removed. The flies without antenna still increased their speed in the same direction as the wind gust, but they only accelerated about half as much as the flies whose antennae were still intact. In addition, the flies without antennae were unable to maintain a constant speed, dramatically alternating between acceleration and deceleration. Together, these results suggested that the antennae were indeed providing wind information that was important for speed regulation.

In order to test the response of the eyes separately from that of the antennae, Fuller and his colleagues projected an animation on the walls of the fly-tracking arena that would trick the eyes into thinking there was no speed increase, even though the antenna could feel the increased windspeed. When the researchers delivered strong headwinds to flies in this environment, the flies decelerated and were unable to recover to their original speed.

"We know that vision is important for flying insects, and we know that flies have one of the fastest visual systems on the planet," Dickinson says, "But this response showed us that as fast as their vision is, if they're flying too fast or the wind is blowing them around too quickly, their visual system reaches its limit and the world starts getting blurry." That is when the antennae kick in, he says.

"Sawyer's study showed that the fly can take another sensor—this little tiny antenna, which doesn't require nearly the amount of processing area within the brain as the eyes—and the fly is able to use that information to compensate for the fact that the information coming out of the eyes is a bit delayed," Dickinson says. "It's kind of a neat trick, using a cheap little sensor to compensate for the limitations of a big, heavy, expensive sensor."

Beyond learning more about the fly's wind-sensing capabilities, Fuller says that this information will also help engineers design small flying robots—creating a sort of man-made fly. "Tiny flying robots will take a lot of inspiration from flies. Like flies, they will probably have to rely heavily on vision to regulate groundspeed," he says.

"A challenge here is that vision typically takes a lot of computation to get right, just like in flies, but it's impossible to carry a powerful processor to do that quickly on a tiny robot. So they'll instead carry tiny cameras and do the visual processing on a tiny processor, but it will just take longer. Our results suggest that little flying vehicles would also do well to have fast wind sensors to compensate for this delay."

The work was published in a study titled "Flying Drosophila stabilize their vision-based velocity controller by sensing wind with their antennae." Other coauthors include former Caltech senior postdoc Andrew D. Straw, Martin Y. Peek (BS '06), and Richard Murray, Thomas E. and Doris Everhart Professor of Control and Dynamical Systems and Bioengineering at Caltech, who coadvised Fuller's graduate work. The study was supported by the Institute for Collaborative Biotechnologies through funding from the U.S. Army Research Office and by a National Science Foundation Graduate Fellowship. 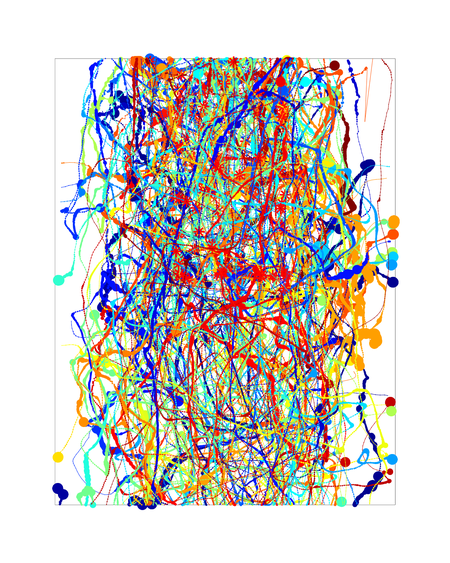 A tracing of the flies' flight trajectories as they explore in a wind tunnel, as seen from above. Each observation by the cameras is scaled according to flight speed, as if the animal was dribbling paint as it was flying; the longer the residence time, the larger the dot. Each trajectory is shown in a different color. The stars indicate when the flies were subjected to a brief gust of wind. These experiments revealed how the wind-sensing antennae stabilize the fly's visual flight controller. Credit: Sawyer Fuller and Andrew D. Straw/Caltech A high-speed video shows the fly from the left, top, and right during a brief wind gust from the front. The gust starts at 0:15 and ends at 0:21. The fly slows down and rises up. Study results showed that in gusts like this one, air drag causes part of the deceleration, but in addition, antennae sense airspeed changes and induce a response that causes the fly to decelerate even further. This added effect stabilizes the fly's visual groundspeed regulator in normal forward flight. Credit: Sawyer Fuller, Dickinson Lab/Caltech
Image Lightbox 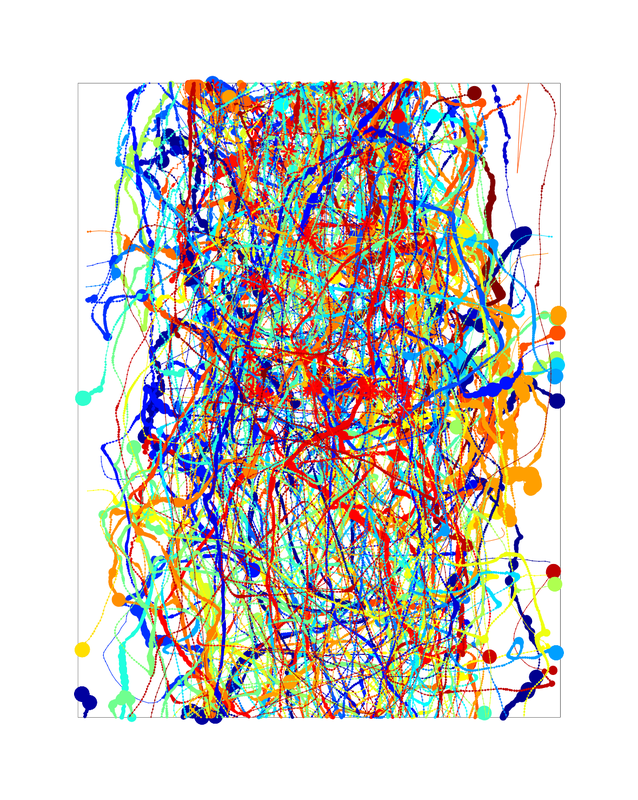 A tracing of the flies' flight trajectories as they explore in a wind tunnel, as seen from above. Each observation by the cameras is scaled according to flight speed, as if the animal was dribbling paint as it was flying; the longer the residence time, the larger the dot. Each trajectory is shown in a different color. The stars indicate when the flies were subjected to a brief gust of wind. These experiments revealed how the wind-sensing antennae stabilize the fly's visual flight controller.
Credit: Sawyer Fuller and Andrew D. Straw/Caltech
Download Full Image
Subscribe
The Caltech Weekly