Rob Anderson, a junior on the Caltech men's basketball team, has been named to the 2015 Allstate National Association of Basketball Coaches Good Works Team. The community service award "honors student-athletes for their off-the-court achievements and commitment to giving back to their communities and positively impacting the lives of those around them," according to the NABC.

"I learned that I was named to the team at 8:30 a.m. after pulling an all-nighter, so it didn't really hit me at first," Anderson says. "I feel extremely honored to represent Caltech and our team on a national scale."

Anderson, who is studying mechanical engineering and business economics and management, was selected for his extensive work researching and designing sustainable energy projects. During his senior year of high school, he designed a 17-foot solar-powered boat for the 2012 Solar Splash Competition. Upon his arrival at Caltech in the fall of 2012, he joined both the basketball team and the Institute's 2013 Department of Energy Solar Decathlon team, which collaborated with architectural design students from the Southern California Institute of Architecture to design, build, and operate a solar-powered house.

During the summer of 2013, Anderson returned to his home state to conduct research at the University of Minnesota, where he designed and coded a tool to calculate the economic feasibility of growing crops that could be converted to fuel in the form of cellulosic ethanol.

"After the Solar Decathlon ended in autumn of 2013, I began looking for another engineering sustainability project," Anderson says. "I noticed there were a few empty gas-engine go-karts in Fleming [one of Caltech's eight undergraduate houses] and I realized I could re-engineer them to use electric power."

Anderson reached out to Caltech and the Resnick Sustainability Institute, and proposed repairing the vehicles, one using battery power and another using a hydrogen fuel cell. He also reached out to the undergraduate population to gauge interest in a sustainable vehicle club. Eventually, more than 100 students signed up for the club's mailing list.

"That's basically how the Sustainable Vehicle Club was born," Anderson says. "The people at the Resnick Institute were excited that a student wanted to lead an engineering project around sustainability. They have played a key role in advising the club, connecting us with the right people around campus and in the corporate world, and have been our main source of funding for purchasing the parts we need."

"Now we're using the old go-kart shells to experiment with drivetrains—the components that deliver power to the driving wheels—and battery systems. We're working with local companies to gather most of the parts." Anderson and his team aim to enter the 2016 Society of Automotive Engineers Formula One Electric Race, an electric vehicle design competition for college engineers.

In addition to design and engineering, Anderson and his group conduct research into the feasibility and efficiency of fuel cells.

"In general, sustainable energy can go either the electric route or the fuel cell route. We're analyzing both systems with respect to these go-karts to figure out their overall energy efficiency."

Engineering the go-karts to run on sustainable energy is still a long-term process. In the more immediate future, Anderson will soon be traveling to attend the NCAA Division I "Final Four" college basketball playoffs with other student-athletes on the NABC's Good Works team. Later in the year, the team will also participate in a community works project and hold a basketball camp for younger players.

"Rob epitomizes the term student-athlete," says head basketball coach Oliver Eslinger. "His character and commitment, both as an academic standout and teammate, are highly valued in our program. He is a perfect representative for athletics and our university, in that he brings efficiency, creativity, and focus to his daily activities. We are so proud of this honor and what it means for Caltech. I know that the folks he meets during Final Four weekend will be impressed with his efforts and abilities to balance basketball with all of his research and academic pursuits." 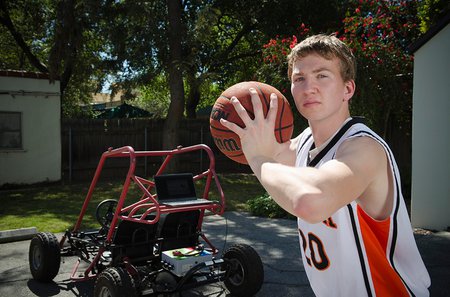 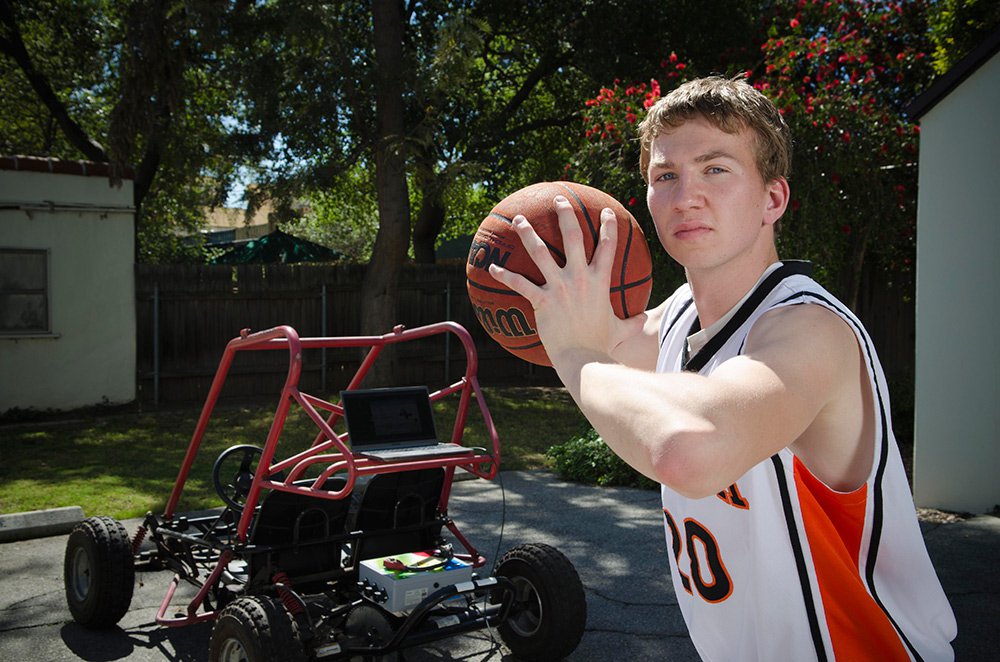