Ahmed Zewail, the Linus Pauling Professor of Chemistry, professor of physics, and director of the Physical Biology Center for Ultrafast Science and Technology at Caltech, passed away on Tuesday, August 2, 2016. He was 70 years old.

Zewail was the sole recipient of the 1999 Nobel Prize in Chemistry for his pioneering developments in femtoscience, making possible observations of atoms in motion on the femtosecond (10-15 seconds) time scale. These developments led to the establishment of the discipline of femtochemistry. More recently, he and his group developed "4D" electron microscopy for the direct visualization in the four dimensions of space and time of materials and biological behaviors.

For his contributions to science and for his public service, Zewail received honors from around the globe. Fifty honorary degrees in the sciences, arts, philosophy, law, medicine, and humane letters were conferred on him, including those from Oxford University, Cambridge University, Peking University, École Normale Supérieure, Yale University, University of Pennsylvania, and Alexandria University.

Zewail was decorated with the Order of the Grand Collar of the Nile, Egypt's highest state honor, and was named to the Order of Légion d'Honneur by the President of France, among other state honors. He was an elected member of academies and learned societies including the National Academy of Sciences, the Royal Society of London, the American Philosophical Society, the French Academy, the Russian Academy, the Chinese Academy, and the Swedish Academy. Postage stamps have been issued in commemoration of his contributions to science and humanity.

"Ahmed was the quintessential scholar and global citizen," says Caltech president Thomas F. Rosenbaum, the Sonja and William Davidow Presidential Chair and professor of physics. "He spent a lifetime developing instruments that interrogate nature in fundamentally new ways, and defining new directions that cut across the physical and biological sciences. Ahmed's fervor for discovery never abated and he serves as an inspiration to colleagues and generations of students. The Caltech community deeply mourns his loss."

"Ahmed Zewail was a great man for chemistry, for science, and for society. All of us at Caltech grieve his loss," says Jacqueline K. Barton, Arthur and Marian Hanisch Memorial Professor of Chemistry and Norman Davidson Leadership Chair of the Division of Chemistry and Chemical Engineering.

Among the more than 100 international prizes and awards, he was the recipient of the Albert Einstein World Award, the Benjamin Franklin Medal, the Leonardo da Vinci Award, the Robert A. Welch Award, the Wolf Prize, the King Faisal Prize, the Othmer Gold Medal, and the Priestley Gold Medal. In his name, international prizes have been established in Amsterdam, Cairo, Detroit, Trieste, and Washington, D.C.; in Cairo, the AZ Foundation provides support for the dissemination of knowledge and for merit awards in arts and sciences.

Following the 2011 Egyptian revolution, the government established Zewail City of Science and Technology as the national project for scientific renaissance, and Zewail became its first chair of the Board of Trustees.

In 2009, President Barack Obama appointed Zewail to the Council of Advisors on Science and Technology, and in the same year he was named the first U.S. Science Envoy to the Middle East. Subsequently, in 2013, Secretary General of the United Nations Ban Ki-moon invited Zewail to join the U.N. Scientific Advisory Board. In Egypt, he served in the Council of Advisors to the President.

Zewail was the author of some 600 articles and 14 books, and was known for his effective public lectures and writings not only on science but also in global affairs. For his leadership role in these world affairs, he received, among others, the "Top American Leaders Award" from The Washington Post and Harvard University.

Born in 1946 in Damanhur, Egypt, Zewail received his early education in Egypt and earned his BS and MS degrees from Alexandria University in 1967 and 1969. He received a PhD from the University of Pennsylvania in 1974 and completed an IBM postdoctoral fellowship at UC Berkeley before joining the faculty at Caltech in 1976 as an assistant professor. He became an associate professor in 1978 and a professor in 1982. He was Linus Pauling Professor of Chemical Physics from 1990–97, was named professor of physics in 1995, and was named Linus Pauling Professor of Chemistry in 1997.

Zewail is survived by his wife, Dema Faham, and his four children, Maha, Amani, Nabeel, and Hani. 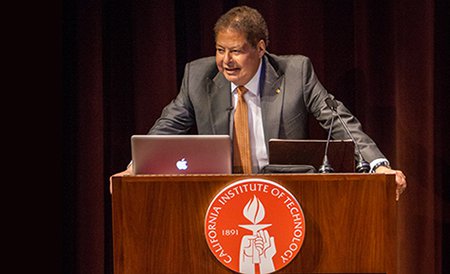 Watch highlights from the "Science and Society" conference honoring Ahmed Zewail's 40 years at Caltech or view the talks.
Image Lightbox 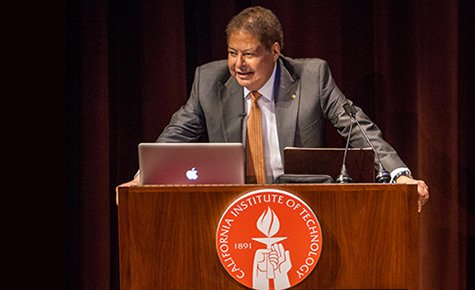