Skip to main content
Home  /  About  /  News  /  After a Half Century, the Exotic Pentaquark Particle is Found

After a Half Century, the Exotic Pentaquark Particle is Found

In July, scientists at the Large Hadron Collider (LHC) reported the discovery of the pentaquark, a long-sought particle first predicted to exist in the 1960s as a consequence of the theory of elementary particles and their interactions proposed by Murray Gell-Mann, Caltech's Robert Andrews Millikan Professor of Theoretical Physics, Emeritus.

In work for which he won the Nobel Prize in Physics in 1969, Gell-Mann introduced the concept of the quark—a fundamental building block of matter. Quarks come in six types, known as "flavors": up, down, top, bottom, strange, and charm. As described in his model, groups of quarks combine into composite particles called hadrons. Combining a quark and an antiquark (a quark's antimatter equivalent) creates a type of hadron called a meson, while baryons are hadrons composed of three quarks. Protons, for example, have two up quarks and one down quark, while neutrons have one up and two down quarks. Gell-Mann's scheme also allowed for more exotic forms of composite particles, including tetraquarks, made of four quarks, and the pentaquark, consisting of four quarks and an antiquark.

The pentaquark was detected at the LHC—the most powerful particle accelerator on Earth—by scientists carrying out the "beauty" experiment, or LHCb. The LHC accelerates protons around a ring almost five miles wide to nearly the speed of light, producing two proton beams that careen toward each other. A small fraction of the protons collide, creating other particles in the process. During investigations of the behavior of one such particle, an unstable three-quark object known as the bottom lambda baryon that decays quickly once formed, LHCb researchers observed unusually heavy objects, each with about 4.5 times the mass of a proton. After further analysis, the researchers concluded that the objects were pentaquarks composed of two up quarks, one down quark, one charm quark, and one anticharm quark. A paper describing the discovery has been published in the journal Physical Review Letters.

It is thought that pentaquarks and other exotic particles may form naturally in violent environments such as exploding stars and would have been created during the Big Bang. A better understanding of these complex arrangements of quarks could offer insight into the forces that hold together all matter as well as the earliest moments of the universe.

"This is part of a long process of discovery of particle states," said Gell-Mann in a statement released by the Santa Fe Institute, where he currently is a Distinguished Fellow. "[In the future] they may find more and more of them, made of quarks and antiquarks and various combinations." 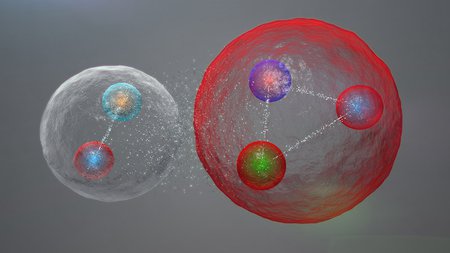 Illustration of one possible layout of the quarks in a pentaquark particle such as those discovered at LHCb. The five quarks might be tightly bonded, or they might be assembled into a meson (one quark and one antiquark) and a baryon (three quarks), weakly bound together, as seen here. Credit: CERN
Image Lightbox 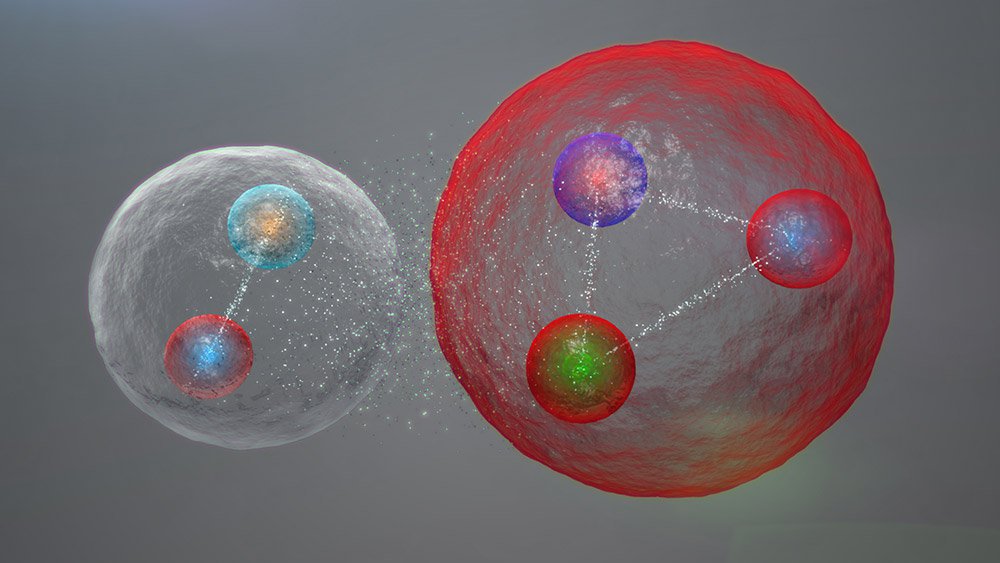 Illustration of one possible layout of the quarks in a pentaquark particle such as those discovered at LHCb. The five quarks might be tightly bonded, or they might be assembled into a meson (one quark and one antiquark) and a baryon (three quarks), weakly bound together, as seen here.
Credit: CERN
Download Full Image
Subscribe
The Caltech Weekly