The central regions of many glittering galaxies, our own Milky Way included, harbor cores of impenetrable darkness—black holes with masses equivalent to millions, or even billions, of suns. What is more, these supermassive black holes and their host galaxies appear to develop together, or "co-evolve." Theory predicts that as galaxies collide and merge, growing ever more massive, so too do their dark hearts.

Black holes by themselves are impossible to see, but their gravity can pull in surrounding gas to form a swirling band of material called an accretion disk. The spinning particles are accelerated to tremendous speeds and release vast amounts of energy in the form of heat and powerful X-rays and gamma rays. When this process happens to a supermassive black hole, the result is a quasar—an extremely luminous object that outshines all of the stars in its host galaxy and that is visible from across the universe. "Quasars are valuable probes of the evolution of galaxies and their central black holes," says George Djorgovski, professor of astronomy and director of the Center for Data-Driven Discovery at Caltech.

In the January 7 issue of the journal Nature, Djorgovski and his collaborators report on an unusual repeating light signal from a distant quasar that they say is most likely the result of two supermassive black holes in the final phases of a merger—something that is predicted from theory but which has never been observed before. The discovery could help shed light on a long-standing conundrum in astrophysics called the "final parsec problem," which refers to the failure of theoretical models to predict what the final stages of a black hole merger look like or even how long the process might take. "The end stages of the merger of these supermassive black hole systems are very poorly understood," says the study's first author, Matthew Graham, a senior computational scientist at Caltech. "The discovery of a system that seems to be at this late stage of its evolution means we now have an observational handle on what is going on."

Djorgovski and his team discovered the unusual light signal emanating from quasar PG 1302-102 after analyzing results from the Catalina Real-Time Transient Survey (CRTS), which uses three ground telescopes in the United States and Australia to continuously monitor some 500 million celestial light sources strewn across about 80 percent of the night sky. "There has never been a data set on quasar variability that approaches this scope before," says Djorgovski, who directs the CRTS. "In the past, scientists who study the variability of quasars might only be able to follow some tens, or at most hundreds, of objects with a limited number of measurements. In this case, we looked at a quarter million quasars and were able to gather a few hundred data points for each one."

"Until now, the only known examples of supermassive black holes on their way to a merger have been separated by tens or hundreds of thousands of light years," says study coauthor Daniel Stern, a scientist at NASA's Jet Propulsion Laboratory. "At such vast distances, it would take many millions, or even billions, of years for a collision and merger to occur. In contrast, the black holes in PG 1302-102 are, at most, a few hundredths of a light year apart and could merge in about a million years or less."

Djorgovski and his team did not set out to find a black hole merger. Rather, they initially embarked on a systematic study of quasar brightness variability in the hopes of finding new clues about their physics. But after screening the data using a pattern-seeking algorithm that Graham developed, the team found 20 quasars that seemed to be emitting periodic optical signals. This was surprising, because the light curves of most quasars are chaotic—a reflection of the random nature by which material from the accretion disk spirals into a black hole. "You just don't expect to see a periodic signal from a quasar," Graham says. "When you do, it stands out."

Of the 20 periodic quasars that CRTS identified, PG 1302-102 was the best example. It had a strong, clean signal that appeared to repeat every five years or so. "It has a really nice smooth up-and-down signal, similar to a sine wave, and that just hasn't been seen before in a quasar," Graham says.

The team was cautious about jumping to conclusions. "We approached it with skepticism but excitement as well," says study coauthor Eilat Glikman, an assistant professor of physics at Middlebury College in Vermont. After all, it was possible that the periodicity the scientists were seeing was just a temporary ordered blip in an otherwise chaotic signal. To help rule out this possibility, the scientists pulled in data about the quasar from previous surveys to include in their analysis. After factoring in the historical observations (the scientists had nearly 20 years' worth of data about quasar PG 1302-102), the repeating signal was, encouragingly, still there.

The team's confidence increased further after Glikman analyzed the quasar's light spectrum. The black holes that scientists believe are powering quasars do not emit light, but the gases swirling around them in the accretion disks are traveling so quickly that they become heated into glowing plasma. "When you look at the emission lines in a spectrum from an object, what you're really seeing is information about speed—whether something is moving toward you or away from you and how fast. It's the Doppler effect," Glikman says. "With quasars, you typically have one emission line, and that line is a symmetric curve. But with this quasar, it was necessary to add a second emission line with a slightly different speed than the first one in order to fit the data. That suggests something else, such as a second black hole, is perturbing this system."

Avi Loeb, who chairs the astronomy department at Harvard University, agreed with the team's assessment that a "tight" supermassive black hole binary is the most likely explanation for the periodic signal they are seeing. "The evidence suggests that the emission originates from a very compact region around the black hole and that the speed of the emitting material in that region is at least a tenth of the speed of light," says Loeb, who did not participate in the research. "A secondary black hole would be the simplest way to induce a periodic variation in the emission from that region, because a less dense object, such as a star cluster, would be disrupted by the strong gravity of the primary black hole."

In addition to providing an unprecedented glimpse into the final stages of a black hole merger, the discovery is also a testament to the power of "big data" science, where the challenge lies not only in collecting high-quality information but also devising ways to mine it for useful information. "We're basically moving from having a few pictures of the whole sky or repeated observations of tiny patches of the sky to having a movie of the entire sky all the time," says Sterl Phinney, a professor of theoretical physics at Caltech, who was also not involved in the study. "Many of the objects in the movie will not be doing anything very exciting, but there will also be a lot of interesting ones that we missed before."

It is still unclear what physical mechanism is responsible for the quasar's repeating light signal. One possibility, Graham says, is that the quasar is funneling material from its accretion disk into luminous twin plasma jets that are rotating like beams from a lighthouse. "If the glowing jets are sweeping around in a regular fashion, then we would only see them when they're pointed directly at us. The end result is a regularly repeating signal," Graham says.

Another possibility is that the accretion disk that encircles both black holes is distorted. "If one region is thicker than the rest, then as the warped section travels around the accretion disk, it could be blocking light from the quasar at regular intervals. This would explain the periodicity of the signal that we're seeing," Graham says. Yet another possibility is that something is happening to the accretion disk that is causing it to dump material onto the black holes in a regular fashion, resulting in periodic bursts of energy.

"Even though there are a number of viable physical mechanisms behind the periodicity we're seeing—either the precessing jet, warped accretion disk or periodic dumping—these are all still fundamentally caused by a close binary system," Graham says.

Written by Ker Than 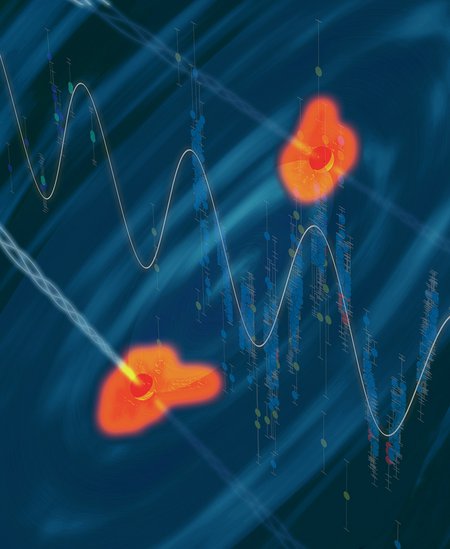 An artist's conception of a black hole binary in a heart of a quasar, with the data showing the periodic variability superposed. Credit: Santiago Lombeyda/Caltech Center for Data-Driven Discovery
Image Lightbox 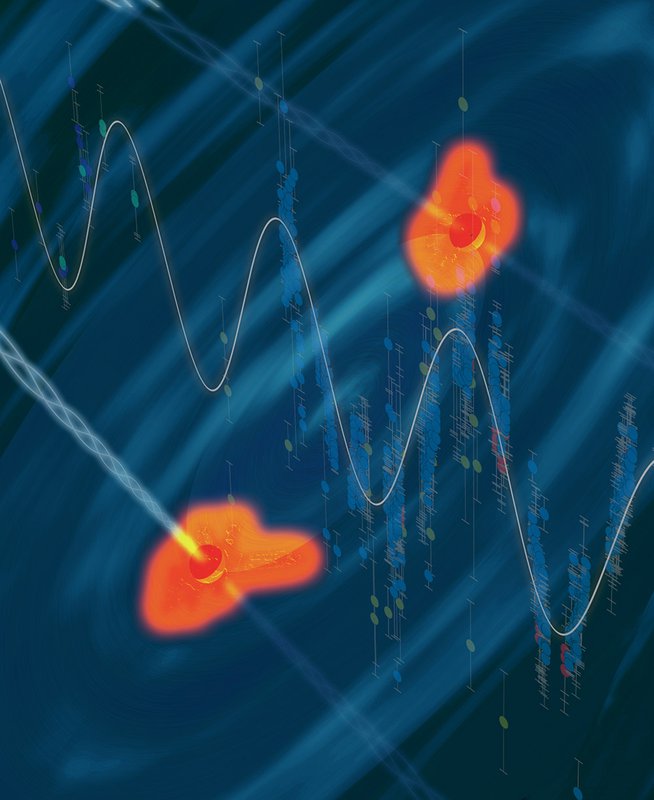 An artist's conception of a black hole binary in a heart of a quasar, with the data showing the periodic variability superposed.
Credit: Santiago Lombeyda/Caltech Center for Data-Driven Discovery
Download Full Image
Subscribe
The Caltech Weekly