PASADENA, Calif.—Stronger than steel or titanium—and just as tough—metallic glass is an ideal material for everything from cell-phone cases to aircraft parts. Now, researchers at the California Institute of Technology (Caltech) have developed a new technique that allows them to make metallic-glass parts utilizing the same inexpensive processes used to produce plastic parts. With this new method, they can heat a piece of metallic glass at a rate of a million degrees per second and then mold it into any shape in just a few milliseconds.

"We've redefined how you process metals," says William Johnson, the Ruben F. and Donna Mettler Professor of Engineering and Applied Science. "This is a paradigm shift in metallurgy." Johnson leads a team of researchers who are publishing their findings in the May 13 issue of the journal Science.

"We've taken the economics of plastic manufacturing and applied it to a metal with superior engineering properties," he says. "We end up with inexpensive, high-performance, precision net-shape parts made in the same way plastic parts are made—but made of a metal that's 20 times stronger and stiffer than plastic." A net-shape part is a part that has acquired its final shape.

Metallic glasses, which were first discovered at Caltech in 1960 and later produced in bulk form by Johnson's group in the early 1990s, are not transparent like window glass. Rather, they are metals with the disordered atomic structure of glass. While common glasses are generally strong, hard, and resistant to permanent deformation, they tend to easily crack or shatter. Metals tend to be tough materials that resist cracking and brittle fracture—but they have limited strength. Metallic glasses, Johnson says, have an exceptional combination of both the strength associated with glass and the toughness of metals. 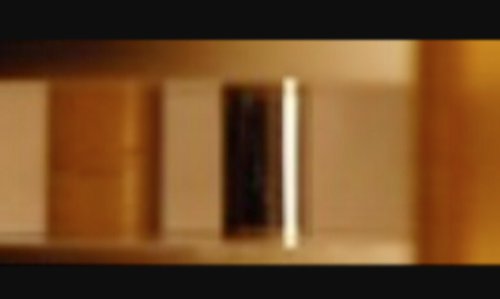 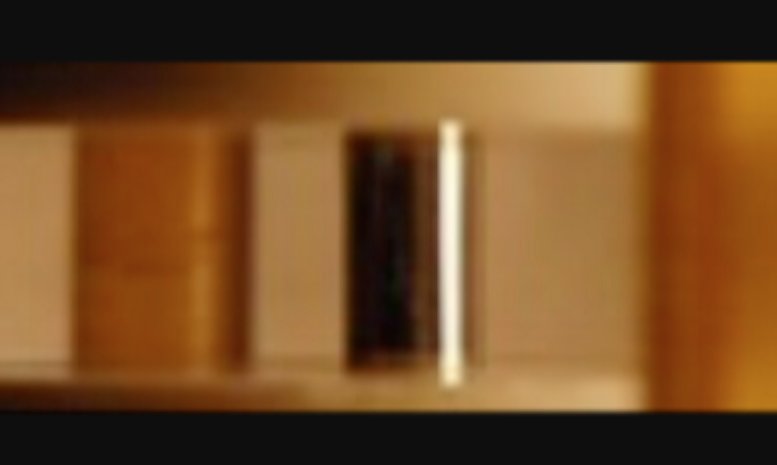 To make useful parts from a metallic glass, you need to heat the material until it reaches its glass-transition phase, at about 500–600 degrees C. The material softens and becomes a thick liquid that can be molded and shaped. In this liquid state, the atoms tend to spontaneously arrange themselves to form crystals. Solid glass is formed when the molten material refreezes into place before its atoms have had enough time to form crystals. By avoiding crystallization, the material keeps its amorphous structure, which is what makes it strong.

Common window glass and certain plastics take from minutes to hours—or longer—to crystallize in this molten state, providing ample time for them to be molded, shaped, cooled, and solidified. Metallic glasses, however, crystallize almost immediately once they are heated to the thick-liquid state. Avoiding this rapid crystallization is the main challenge in making metallic-glass parts.

Previously, metallic-glass parts were produced by heating the metal alloy above the melting point of the crystalline phase—typically over 1,000 degrees C. Then, the molten metal is cast into a steel mold, where it cools before crystallizing. But problems arise because the steel molds are usually designed to withstand temperatures of only around 600 degrees C. As a result, the molds have to be frequently replaced, making the process rather expensive. Furthermore, at 1,000 degrees C, the liquid is so fluid that it tends to splash and break up, creating parts with flow defects.

If the solid metallic glass is heated to about 500–600 degrees C, it reaches the same fluidity that liquid plastic needs to have when it's processed. But it takes time for heat to spread through a metallic glass, and by the time the material reaches the proper temperature throughout, it has already crystallized.

So the researchers tried a new strategy: to heat and process the metallic glass extremely quickly. Johnson's team discovered that, if they were fast enough, they could heat the metallic glass to a liquid state that's fluid enough to be injected into a mold and allowed to freeze—all before it could crystallize.

To heat the material uniformly and rapidly, they used a technique called ohmic heating. The researchers fired a short and intense pulse of electrical current to deliver an energy surpassing 1,000 joules in about 1 millisecond—about one megawatt of power—to heat a small rod of the metallic glass. 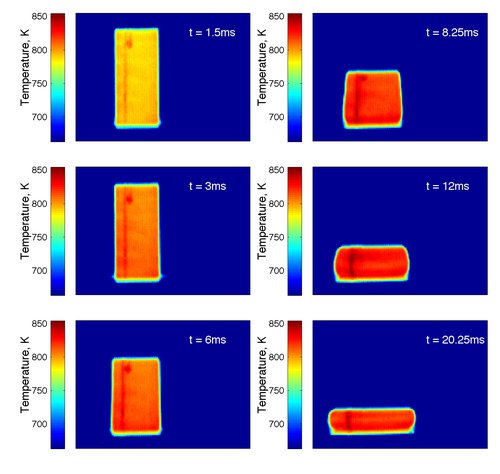 A piece of metallic glass being heated and squished in milliseconds, as seen in these infrared snapshots. Credit: Joseph P. Schramm
Image Lightbox 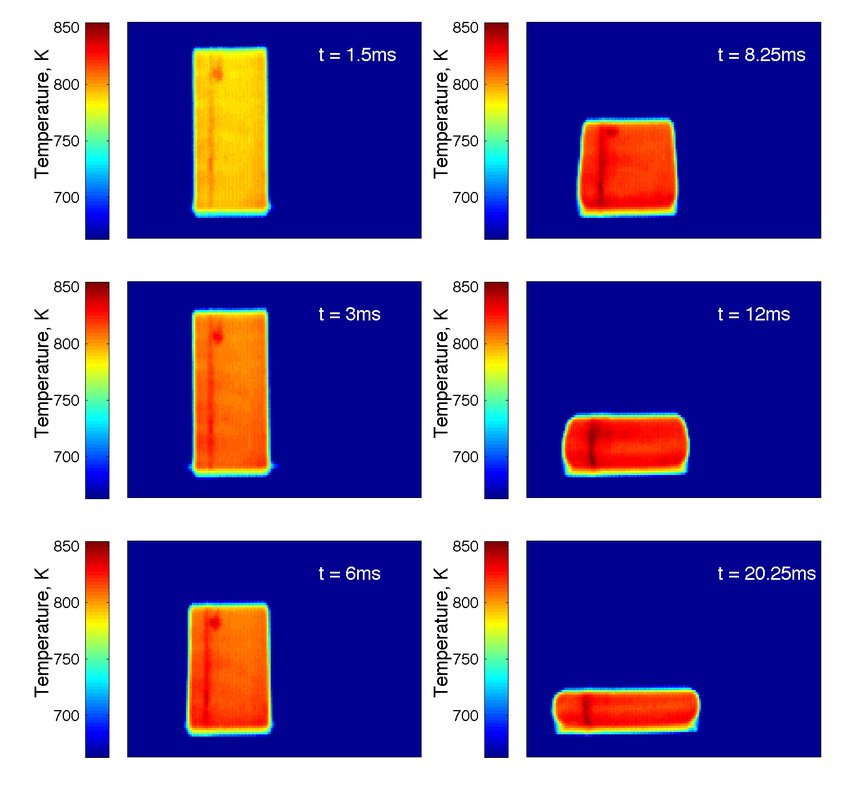 A piece of metallic glass being heated and squished in milliseconds, as seen in these infrared snapshots.
Credit: Joseph P. Schramm
Download Full Image

The current pulse heats the entire rod—which was 4 millimeters in diameter and 2 centimeters long—at a rate of a million degrees per second. "We uniformly heat the glass at least a thousand times faster than anyone has before," Johnson says. Taking only about half a millisecond to reach the right temperature, the now-softened glass could be injected into a mold and cooled—all in milliseconds. To demonstrate the new method, the researchers heated a metallic-glass rod to about 550 degrees C and then shaped it into a toroid in less than 40 milliseconds. Despite being formed in open air, the molded toroid is free of flow defects and oxidation.

In addition, this process allows researchers to study these materials in their molten states, which was never before possible. For example, by heating the material before it can crystallize, researchers can examine the crystallization process itself on millisecond time scales. The new technique, called rapid discharge forming, has been patented and is being developed for commercialization, Johnson says. In 2010, he and his colleagues started a company, Glassimetal Technology, to commercialize novel metallic-glass alloys using this kind of plastic-forming technology.

The other authors on the Science paper, "Beating crystallization in glass-forming metals by millisecond heating and processing," are Caltech's Georg Kaltenboeck, Marios D. Demetriou, Joseph P. Schramm, Xiao Liu, Konrad Samwer (a visiting associate from the University of Gottingen, Germany), C. Paul Kim, and Douglas C. Hofmann. This research benefited from support by the II-VI Foundation. 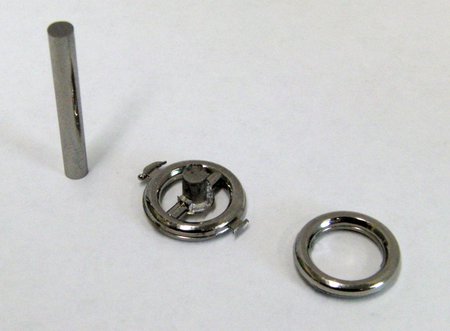 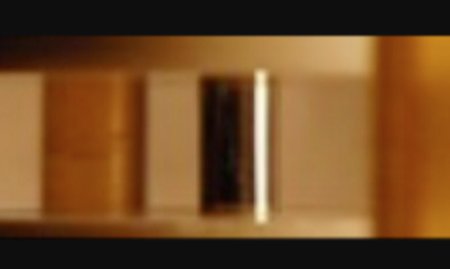 A piece of metallic glass is heated and squished in just 10 milliseconds. Credit: Georg Kaltenboeck 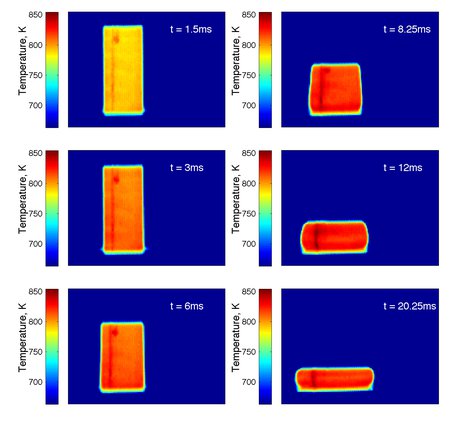 A piece of metallic glass being heated and squished in milliseconds, as seen in these infrared snapshots. Credit: Joseph P. Schramm 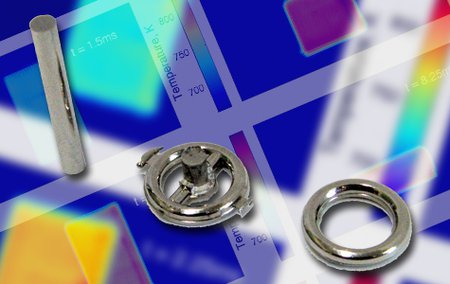