Skip to main content
Home  /  About  /  News  /  Fifty Years Ago, A Major Earthquake Shifted the Course of Seismology in SoCal

Fifty Years Ago, A Major Earthquake Shifted the Course of Seismology in SoCal

The 1971 San Fernando quake led the USGS and Caltech to join forces, expanding seismic monitoring through the region

February 9 marks 50 years since the devastating 1971 San Fernando earthquake that rocked Los Angeles. The magnitude-6.6 temblor was the worst the region had experienced for decades. But out of the tragedy came a period of tremendous advances in earthquake science and also in increasing public safety during earthquakes in Southern California.

Just seconds after 6 a.m. on February 9, 1971, a 12-mile section of an under-appreciated fault along the San Gabriel Mountains suddenly and dramatically slipped. The entire Los Angeles region was rattled, but the shaking was particularly violent in the northeastern corner of the San Fernando Valley. By its end, two large hospitals (including one that was just months old) lay destroyed, powerlines had fallen, gas lines had exploded, freeway overpasses had collapsed, and many older buildings were damaged beyond repair. In the end, 65 people lost their lives, more than 2,000 other individuals were injured, and more than $500 million in property damage was apparent.

It might be hard to imagine today because good information is available at our fingertips almost immediately following any earthquake. But on that day, the network of seismometers that monitor ground shaking in Southern California was fledgling, and scientists knew very little about what actually happened during an earthquake.

"People hadn't even started to ask the important questions about how earthquakes really happen," says Thomas Heaton (PhD '78), professor of engineering seismology, emeritus, at Caltech. "The 1971 San Fernando earthquake marked a major transition in earthquake science, and Caltech was very much in the lead in that transition." 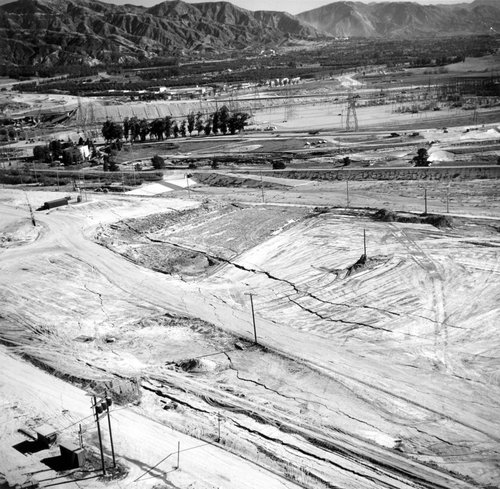 North-Trending fracture pattern near the Sylmar Converter Station above the upon Van Norman Dam. The fracture was due to a landslide and the dam's setting in extensive fill material. Credit: USGS/Public domain
Image Lightbox 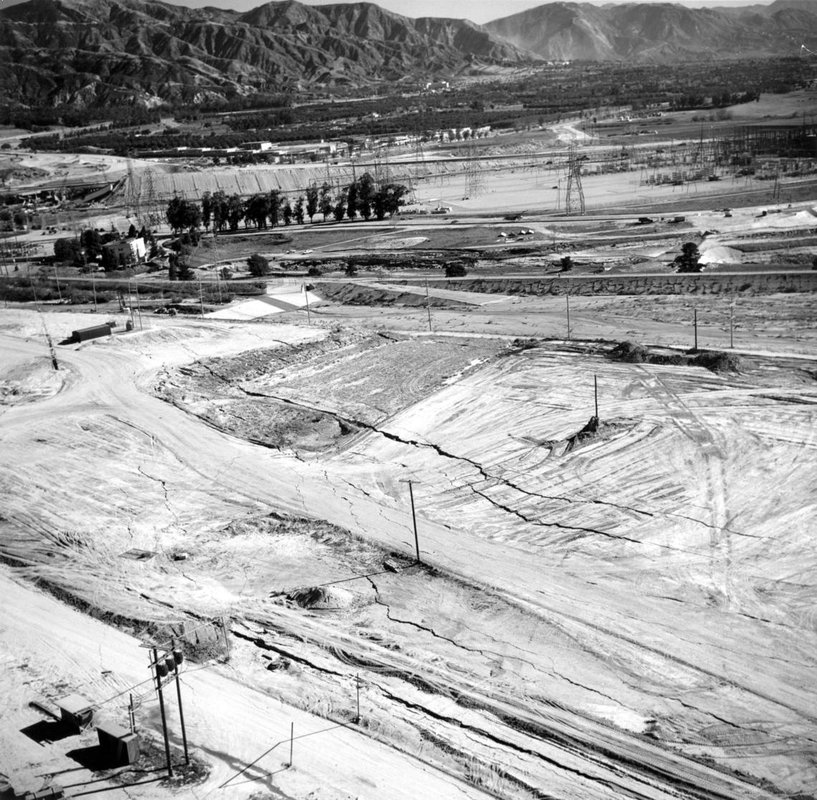 North-Trending fracture pattern near the Sylmar Converter Station above the upon Van Norman Dam. The fracture was due to a landslide and the dam's setting in extensive fill material.
Credit: USGS/Public domain
Download Full Image

The quake struck at the end of a period of significant urban expansion in Los Angeles, when the region's first tall buildings had recently been constructed. One of the requirements for building such tall structures had been to keep a record of the shaking they experienced during earthquakes. As a result, the San Fernando earthquake was the first that was well-recorded by dozens of nearby seismometers.

"This was the first time we really had a glimpse of what the shaking was like around a major earthquake," explains Heaton. "It allowed us to really begin to understand what the earthquake process was like."

Heaton himself has made computer models of what happened during the 1971 quake—of what exactly happened along the fault. The models that best fit the actual records from the event turned out to be very different from what earthquake scientists would have expected at that time. Eventually those efforts, in combination with work on additional earthquakes, led to a completely new idea of earthquake physics: earthquakes unfold over time, with faults starting to slip in one place with the slip moving outward and migrating along the fault.

There was also a new realization among scientists after the 1971 earthquake that the thrust faults along the mountain ranges to the north of the L.A. region, such as the San Fernando and Sierra Madre faults, could produce large-magnitude quakes. The focus before San Fernando had been on the San Andreas and Newport-Inglewood faults. When the 1994 Northridge earthquake happened and was nearly a twin to the San Fernando event, scientists knew much more about what to expect.

Equally important after the quake, Heaton says, was the great sense among earthquake scientists and engineers that monitoring and reporting systems had to be improved. When the San Fernando quake hit, it knocked out power to most of the L.A. region. In the most badly damaged area in the San Fernando Valley, all communications went down, so it was difficult for emergency responders to know where to focus their efforts. Seismologists too were left virtually blind. Caltech's Seismological Laboratory normally received records of shaking via the telephone lines, but those were down as well.

"Our inability to respond to that earthquake really had a strong impact on me and many of my colleagues to try to build a system that would provide information during the emergency to help emergency managers know what to do," says Heaton.

Immediately after the 1971 earthquake, the U.S. Geological Survey (USGS), which had been operating in the Bay Area, was told to set up shop in Southern California. After all, the San Fernando earthquake had been by far the country's most damaging earthquake since the 1906 San Francisco earthquake.

Caltech welcomed the USGS with open arms, and together, Caltech researchers and the USGS have put many systems in place to reveal where the shaking was during an earthquake and its strength. Now, those systems are so fast that Southern California has an earthquake early warning system that can warn that shaking is on its way.

"For the last 50 years we've had this incredibly strong relationship between the USGS and Caltech, and that has allowed the seismic networks in Southern California to both grow larger and to more naturally evolve to include the newest scientific ideas than they ever would have without it," says Mike Gurnis, the John E. and Hazel S. Smits Professor of Geophysics and director of the Seismo Lab.

Another major piece of the developments following the 1971 earthquake was the creation by the federal government in 1977 of a multi-agency program called the National Hazards Earthquake Reduction Program (NHERP).

"It would be difficult to overstate the importance of NHERP for earthquake research, monitoring, and reporting in Southern California," says Lucy Jones, a visiting associate in geophysics at Caltech who served with the USGS for more than 30 years. "It was created as part of the outcome of the 1971 earthquake, and it's the main government program that's funded earthquake work ever since, including the seismic network at Caltech and the USGS office in Pasadena. It's also where the funding was added to bring about earthquake early warning."

For the public, perhaps the most important outcomes of the 1971 San Fernando event were the laws and changes to building codes that were put into place to make buildings safer during major earthquakes. Because the damage during the quake had been so horrible, one of the first changes was the adoption of new seismic standards for hospitals.

Other changes took a bit longer. During the quake, the San Fernando Fault actually came to the surface of the earth and tore through people's houses. Prior to the event there was nothing to prevent builders from constructing homes and businesses directly on top of active fault lines.

But as Jones notes, there are two types of damage associated with earthquakes. "The damage from shaking can be stopped by building stronger buildings," she says. "The danger from the fault can't be stopped because the fault itself is moving." 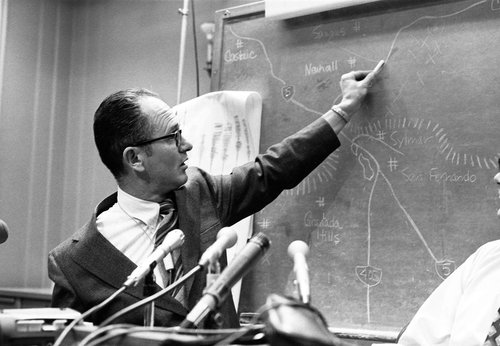 Clarence Allen answers questions about the San Fernando Earthquake during a press conference at the Seismological Laboratory on February 10, 1971. Credit: Caltech
Image Lightbox 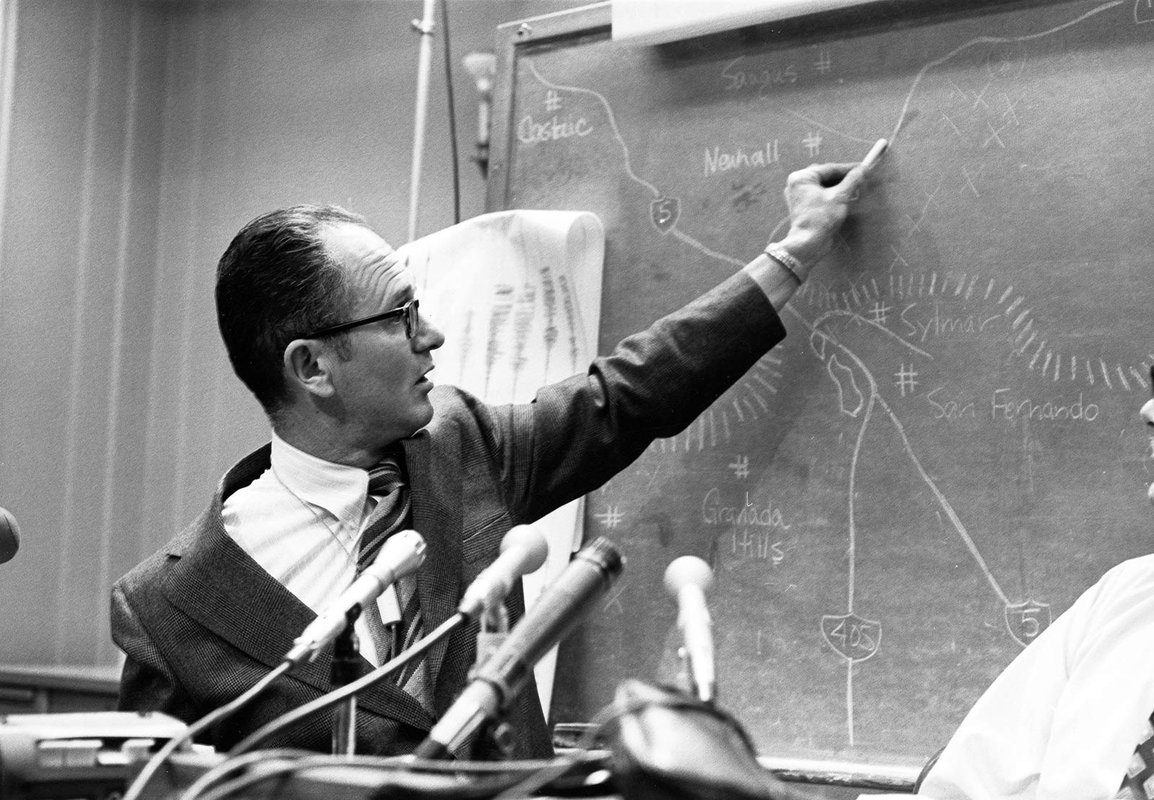 After the 1971 earthquake, Clarence Allen (MS '51, PhD '54), the late Caltech geologist and geophysicist, went to Sacramento and explained to legislators that geologists know where the active faults are and that an earthquake like San Fernando would certainly happen again in California. In 1972, the California legislature passed the Alquist-Priolo Earthquake Fault Zoning Act, which prohibits building across active faults. "It was really because of Clarence spending the time and the effort to help people understand that geology could actually tell you where this was going to happen that this change was made," says Jones.

It took a lot more fighting and time to get the City of Los Angeles to require a change that seismologists identified as sorely needed after the 1971 earthquake: the requirement to retrofit unreinforced masonry buildings. During the earthquake, many of these unreinforced buildings suffered damage, including tragic collapses at a homeless shelter in downtown Los Angeles and at the Veterans Administration Hospital in San Fernando, where 49 people died. In 1981, the city required that about 10,000 unreinforced buildings either be retrofitted or torn down. In 1986, the state of California passed a law requiring that all jurisdictions catalog unreinforced masonry buildings and develop retrofitting programs.

"In 1994, when the Northridge earthquake happened, nobody died in an unreinforced masonry building," says Jones, "which is pretty amazing because that's always been where people die in California earthquakes. So the 1971 earthquake certainly saved lives in the 1994 earthquake."