Evidence for a Human Geomagnetic Sense

Many humans are able to unconsciously detect changes in Earth-strength magnetic fields, according to scientists at Caltech and the University of Tokyo.

The study, led by geoscientist Joseph Kirschvink (BS, MS '75) and neuroscientist Shin Shimojo at Caltech as well as neuroengineer Ayu Matani at the University of Tokyo, offers experimental evidence that human brain waves respond to controlled changes in Earth-strength magnetic fields. Kirschvink and Shimojo say this is the first concrete evidence of a new human sense: magnetoreception. Their findings were published by the journal eNeuro on March 18.

"Many animals have magnetoreception, so why not us?" asks Connie Wang, Caltech graduate student and lead author of the eNeuro study. For example, honeybees, salmon, turtles, birds, whales, and bats use the geomagnetic field to help them navigate, and dogs can be trained to locate buried magnets. It has long been theorized that humans may share a similar ability. However, despite a flurry of research attempting to test for it in the '80s, it has never been conclusively demonstrated.

"Aristotle described the five basic senses as including vision, hearing, taste, smell, and touch," says Kirschvink, co-corresponding author of the eNeuro study and Nico and Marilyn Van Wingen Professor of Geobiology. "However, he did not consider gravity, temperature, pain, balance, and several other internal stimuli that we now know are part of the human nervous system. Our animal ancestry argues that geomagnetic field sensors should also be there representing not the sixth sense but perhaps the 10th or 11th human sense to be discovered."

To try to determine whether humans do sense magnetic fields, Kirschvink and Shimojo built an isolated radiofrequency-shielded chamber and had participants sit in silence and utter darkness for an hour. During that time, they shifted the magnetic field silently around the chamber and measured participants' brain waves via electrodes positioned at 64 locations on their heads.

The test was performed with 34 human participants from a wide age range and a variety of ethnicities. During a given session, the participants consciously experienced nothing more interesting than sitting alone in the dark. However, among many participants, changes in their brain waves correlated with changes in the magnetic field around them. Specifically, the researchers tracked the alpha rhythm in the brain, which occurs at between 8 and 13 Hertz and is a measure of whether the brain is being engaged or is in a resting or "autopilot" mode. When a human brain is unengaged, the alpha power is high. When something catches its attention, consciously or unconsciously, its alpha power drops. Several other sensory stimuli like vision, hearing, and touch are known to cause abrupt drops in the amplitude of alpha waves in the first few seconds after the stimulus.

The experiments showed that, in some participants, alpha power began to drop from baseline levels immediately after magnetic stimulation, decreasing by as much as 60 percent over several hundred milliseconds, then recovering to baseline a few seconds after the stimulus. "This is a classic, well-studied brain wave response to a sensory input, termed event-related desynchronization, or alpha-ERD," says Shimojo, Gertrude Baltimore Professor of Experimental Psychology and affiliated faculty member of the Tianqiao and Chrissy Chen Institute for Neuroscience at Caltech.

The tests further revealed that the brain appears to be actively processing magnetic information and rejecting signals that are not "natural." For example, when the vertical component of the magnetic field pointed steadily upward during the experiments, there were no corresponding changes in brain waves. Because the magnetic field normally points down in the Northern Hemisphere, it seems that the brain is ignoring signals that are obviously "wrong." This component of the study could be verified by replicating the experiment in the Southern Hemisphere, Kirschvink suggests, where the opposite pattern should hold.

"Alpha-ERD is a strong neural signature of sensory detection and the resulting attention shift. The fact that we see it in response to simple magnetic rotations like we experience when turning or shaking our head is powerful evidence for human magnetoreception. The large individual differences we found are also intriguing with regard to human evolution and the influences of modern life," says Shimojo. "As for the next step, we ought to try bringing this into conscious awareness."

One of the challenges in early attempts to test human magnetoreception was the difficulty of making sure that those changes in brain waves were, indeed, correlated to the magnetic field and not to some other confounding effect. For example, if the coils generating the magnetic field around the chamber created an audible hum, that might be enough to trigger a change in alpha power in participants.

To address those issues, the chamber used in this study was not only pitch black and isolated, the copper wires for altering the magnetic field were wrapped and cemented in place in duplicate: each coil has a pair of wires rather than a single strand. When current is directed through these wire pairs in the same direction, the magnetic field in the chamber is altered. However, running the current in opposite directions through the wires in the pairs cancels their magnetic fields, while yielding the same electrical heating and mechanical artifacts. Computers completely controlled the experiments and recorded the data. Results were processed automatically with turn-key computer scripts and no subjective steps. In this fashion, the team was able to show that the human brains did, indeed, respond to the magnetic field as opposed to just the energizing of the coils themselves.

"Our results rule out electrical induction and the 'quantum compass' hypotheses for the magnetic sense," says Kirschvink, naming two possibilities that have been proposed for explaining the mechanism behind magnetoreception. Kirschvink suggests instead that the results implicate biological magnetite as the sensory agent for human magnetoreception. In 1962, Heinz A. Lowenstam, a Caltech professor from 1954 until his death in 1993, discovered that magnetite, a naturally magnetic mineral, occurs in mollusk teeth. Since then, biological magnetite has been found to exist in organisms from bacteria to humans and has been linked to the geomagnetic sense in many of them.

By developing and demonstrating a robust methodology for testing humans for magnetoreception, Kirschvink says he hopes this study can act as a roadmap for other researchers who are interested in attempting to replicate and extend this research. "Given the known presence of highly evolved geomagnetic navigation systems in species across the animal kingdom, it is perhaps not surprising that we might retain at least some functioning neural components, especially given the nomadic hunter-gatherer lifestyle of our not-too-distant ancestors. The full extent of this inheritance remains to be discovered," he says.

The paper is titled "Transduction of the Geomagnetic Field as Evidenced from Alpha-band Activity in the Human Brain." In addition to Kirschvink, Shimojo, and Wang, co-authors include Ayumu Matani of the University of Tokyo, Caltech staff members Daw-An Wu (PhD '06) and Isaac Hilburn (BS '04), former Caltech undergraduates Christopher Cousté (BS '17) and Jacob Abrahams (BS '17), former University of Tokyo graduate student Yuki Mizuhara, and Princeton University student Sam Bernstein. This research was supported initially by the Human Frontiers Science Program and more recently by the RadioBio program of the Defense Advanced Research Projects Agency (DARPA) to the Caltech group, by the Japanese Science and Technology Agency (CREST) to Wang and Shimojo, and by the Japan Society for the Promotion of Science to the University of Tokyo group.

Video shows the changes in alpha wave amplitude—a measure of whether the brain is being engaged or is in a resting or "autopilot" mode—following rotations of an Earth-strength magnetic field. On the left, counterclockwise rotations induce a widespread drop in alpha wave amplitude. (The darker the blue color, the more dramatic the drop.) No drop is observed after clockwise rotation or in the FIXED condition. Credit: Connie X. Wang / Caltech
Image Lightbox

Video shows the changes in alpha wave amplitude—a measure of whether the brain is being engaged or is in a resting or "autopilot" mode—following rotations of an Earth-strength magnetic field. On the left, counterclockwise rotations induce a widespread drop in alpha wave amplitude. (The darker the blue color, the more dramatic the drop.) No drop is observed after clockwise rotation or in the FIXED condition.
Credit: Connie X. Wang / Caltech
Download Full Image 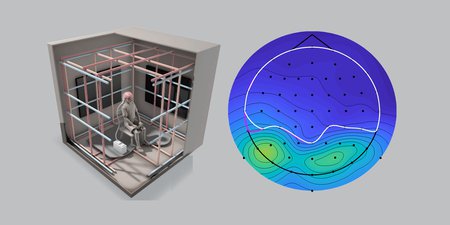 Left: Schematic drawing of human magnetoreception test chamber at Caltech. This diagram was modified from the figure “Center of attraction” by C. Bickel (Hand, 2016) with permission. Right: An example of the brain’s drop in alpha-wave power, following brief rotations of the magnetic field through an individual’s head. Dark blue indicates the drop in alpha wave intensity. Credit: Left: Science. Right: Caltech
Image Lightbox 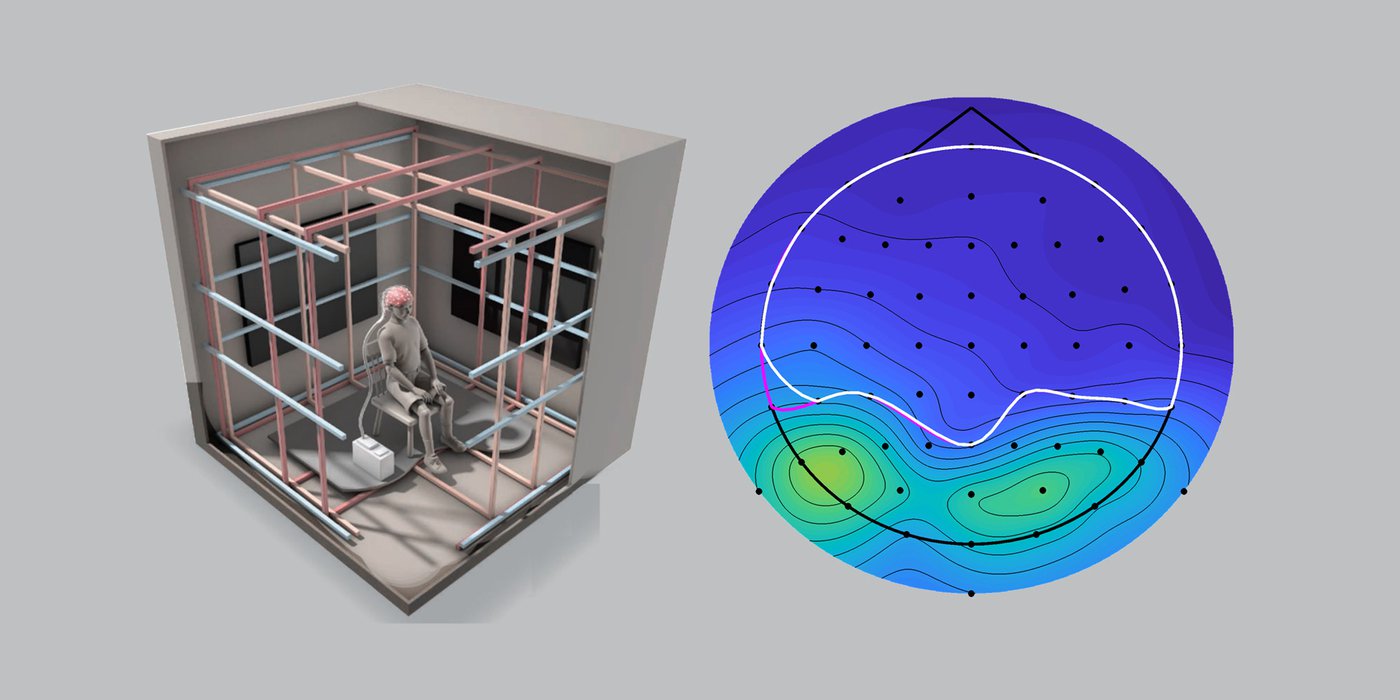