A team of undergrads recently received accolades for their research at an international competition in Boston. Their studies, which earned them a gold award at the 2011 International Bio-Molecular Design Competition, started out as a summer undergrad research fellowship (SURF) project. Caltech senior Yae Lim Lee, along with juniors Shayan Doroudi and Sarah Wittman, sophomore Gregory Izatt, and National University of Singapore student Zibo Chen, also received a third place ranking in the "best wiki" prize category, based on a series of web pages that explained their project, "DeoxyriboNucleicAwesome."

BIOMOD is a competition for undergraduate teams who design research to address the control of biomolecules on the nanometer scale. The groups presented their work at the Wyss Institute for Biologically Inspired Engineering at Harvard on November 5.

"The BIOMOD 2011 Jamboree was really exciting because we got to see what interesting projects many other undergraduate teams pursued this summer," says Doroudi, who is studying computer science. "It was surprising to see the success that many undergraduates had in projects varying from potential DNA-based drug delivery systems to DNA counters."

The Caltech team's challenge was to make a synthetic DNA robot that has the ability to take a random walk —instead of walking on set path or track—on a two-dimensional origami surface that also made out of DNA. They also wanted their robot to be able to pick up cargo molecules that it encountered along the walk, and deposit those molecules at predetermined locations on the surface. So far, the team has successfully shown that the robot does, in fact, randomly walk on the surface. They were also able to prove that the robot could pick up and drop off cargo molecules, but only in solution, as opposed to the origami surface.

"The goal was fairly simple, but its implementation requires a system of quite some complexity," says Izatt, a student in computation and neural systems. "Although people have created DNA robots to move cargos across a platform, those walkers have lots of limitations, like only being proven to walk along a one-dimension track, and only being able to traverse that track once."

He adds that in investigating random walking, the team found that the robots exhibited an interesting behavior in which they stepped off of their track on the origami platform onto spare tracks floating around in solution, and then stepped off of that track, after it floated somewhere else, to step back onto a platform in a completely different location. "We termed this 'space walking,' and have been trying to control for it ever since!" he says.

The team's ultimate goal is show that their robot can actually pick up and drop off cargos when walking on the origami surface. According to their faculty mentor, Erik Winfree, the students will finish their project over the school year, with the hopes of then publishing a high-profile paper.

"I was extremely impressed by the group—their work is really good," says Winfree, professor of computer science, computation and neural systems, and bioengineering. "They are number one in my book."

The team, which was sponsored by Caltech's Molecular Programming Project, also received training and guidance from one graduate and two postdoc mentors. Niranjan Srinivas, a graduate student in computation and neural systems, Damien Woods, a senior postdoctoral scholar in computer science, and Lulu Qian, a senior postdoctoral scholar in bioengineering, helped the group formulate the project, design experiments, and interpret the results.

To watch a video that explains the team's BIOMOD research project, click here. 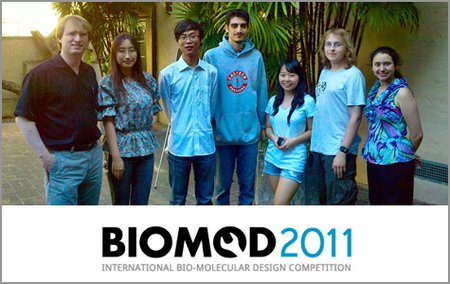 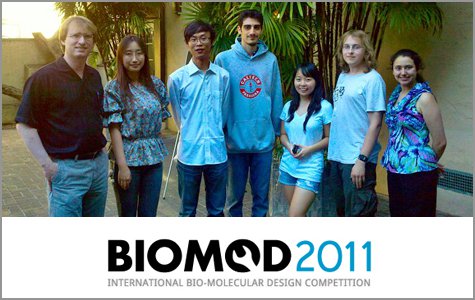