Skip to main content
Home  /  About  /  News  /  The Cost of "Living": How Viruses Hijack a Host's Energy Supply

The Cost of "Living": How Viruses Hijack a Host's Energy Supply

Viruses occupy a strange no-man's-land between the living and the nonliving. In order to reproduce, they must infect a living host and hijack its resources. But while it is understood that this parasitic relationship can lead to disease and death, few quantitative studies have examined the energetic cost of viral infections relative to the host's energy economy.

A new study by Caltech researchers now provides the first quantitative estimates of the energetic burden of various viral processes across different types of viral infections. The work provides critical insights into the energy constraints guiding viral life cycles and evolution, which could ultimately lead to better vaccines and treatments.

Many viruses, such as the ones examined in this paper, are essentially spherical shells called capsids containing genetic material. When a virus infects a host cell, it uses the cell's machinery to make copies of its own genetic material in a process called replication. During the stage known as translation, this genetic material is used to produce the proteins that will form the capsid. Finally, during the process of self-assembly, that protein shell and the copies of the virus's genetic material are assembled into new viruses. At some point, after many such viruses have been synthesized within the host, the host cell reaches its burst size—the size at which newly created viruses burst out of the cell and go on to infect new hosts. In principle, infection spreads faster as the burst size becomes larger.

Phillips, along with first author and graduate student Gita Mahmoudabadi and their colleagues, set out to quantify how much energy is stolen from the host during each of these processes—and how that may set a limit on the number of viruses produced and released by an infected cell.

The team looked at two different kinds of viruses: T4, a so-called bacteriophage virus, which uses DNA as its genetic material and infects bacteria; and the influenza virus, which uses RNA to carry its genetic information and infects mammalian cells. Using their estimates for the energy it takes to build one virus and for the burst sizes of the two viruses, they calculated the total cost to the host of the infection.

The researchers found that the bacteriophage usurped roughly 30 percent of its host organism's energetic resources and produced about 200 viruses before bursting out of the cell. The influenza virus, on the other hand, siphoned away only about 1 percent of its host cell's energy but created about 6,000 new viruses.

"You might think that a virus would want to drain as much energy from the host as possible in order to maximize its burst size," Mahmoudabadi says. "But our estimates show that this strategy is most befitting viruses that infect single-celled organisms such as bacteria. We were surprised to learn that viruses infecting multicellular organisms, such as those responsible for the seasonal flu, take up a small fraction of the host energy supply. We think this might be reflective of influenza's strategy to ensure both its immediate and long-term survival by sparing its multicellular host."

These studies provide a foundation for further work aimed at disentangling the complicated set of interactions that govern the winners and losers in this ever-present warfare between organisms and their pathogens.

The paper is titled "The energetic cost of building a virus." Ron Milo of the Weizmann Institute of Science is a co-author. Funding was provided by the National Science Foundation, the John Templeton Foundation, and the National Institutes of Health. 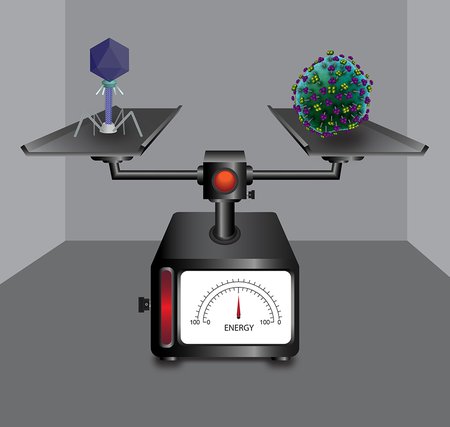 A host will lose the same amount of energy to create two very different viruses: T4, which infects bacteria, and influenza, which infects mammals like humans. But compared to the host's energy budget, T4 takes up a much more substantial fraction of energy than influenza. Credit: Caltech
Image Lightbox 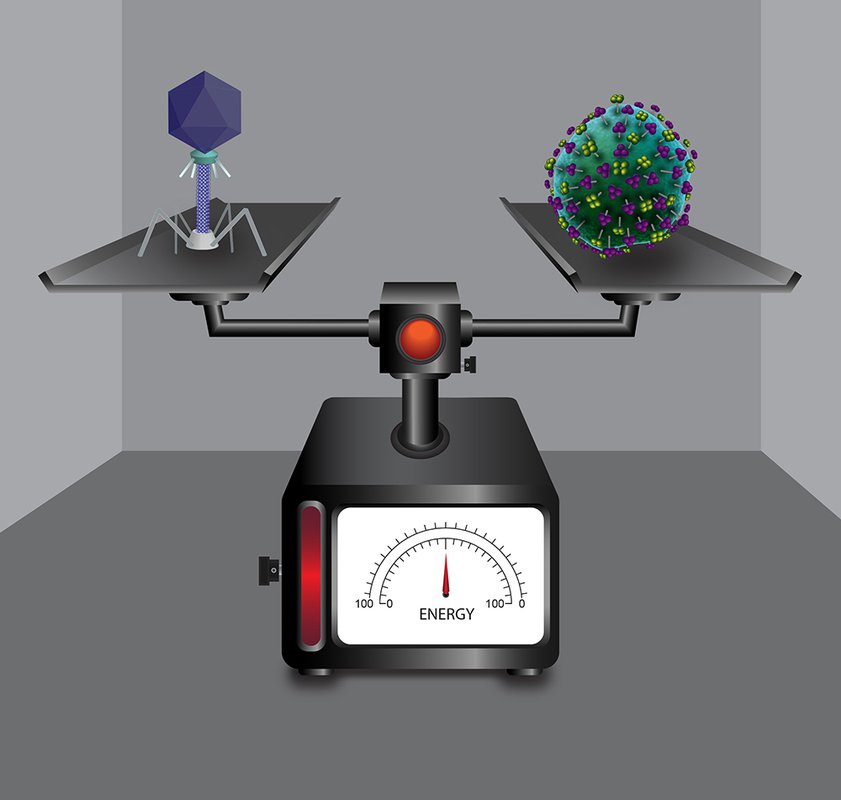 A host will lose the same amount of energy to create two very different viruses: T4, which infects bacteria, and influenza, which infects mammals like humans. But compared to the host's energy budget, T4 takes up a much more substantial fraction of energy than influenza.
Credit: Caltech
Download Full Image
Subscribe
The Caltech Weekly