PASADENA, Calif.--Two prominent researchers from the California Institute of Technology (Caltech) have been named among the country's 24 top leaders by U.S. News Media Group in association with the Center for Public Leadership (CPL) at Harvard Kennedy School. The 2008 edition of America's Best Leaders--available online at www.usnews.com/leaders and on newsstands Monday, November 24--includes honors for Caltech's David Baltimore and Fiona Harrison.

According to U.S. News, the Best Leaders issue features "some of the country's most visionary individuals," highlighting those professionals "who continue to offer optimism and hope through their work."

Nobel Laureate David Baltimore, the Robert Andrews Millikan Professor of Biology and former president of Caltech, was lauded by the magazine for the way he has "profoundly influenced national science policy on such issues as recombinant DNA research and the AIDS epidemic. He is an accomplished researcher, educator, administrator and public advocate for science and engineering, and is considered one of the world's most influential biologists."

Baltimore was awarded the Nobel Prize in Physiology or Medicine in 1975, at the age of 37. He served as president of Caltech for nine years and was named president emeritus in 2006. He had previously spent almost 30 years on the faculty of the Massachusetts Institute of Technology, where he contributed widely to the understanding of cancer, AIDS, and the molecular basis of the immune response, and where he served as founding director of the Whitehead Institute for Biomedical Research from 1982 until 1990. He served as president of the American Association for the Advancement of Science from 2007 to 2008, and is currently its chair.

Baltimore says he is "very honored to be named among this exceptional group of leaders."

Leadership, he says, "involves a vision of the future, and a generosity of spirit that allows the leader to take pleasure in the accomplishments of others." Leadership can't be about micromanaging every aspect of a large organization, he notes. "It's about picking the right people, motivating them, and encouraging them. You have to make sure those people are pulling in the same direction. You have to catalyze interaction between people so that they see a commonality of interests--so that they follow a common line."

Fiona Harrison, a professor of physics and astronomy at Caltech, was chosen for her work as principal investigator of the NuSTAR (Nuclear Spectroscopic Telescope Array) Mission, a pathfinder mission that will "open the high energy X-ray sky for sensitive study for the first time," she says. She started developing the technologies necessary to realize NuSTAR more than a decade ago, and assembled and led a team of scientists and engineers to design and implement the mission. NuSTAR was selected by NASA through a competitive process and will launch in mid-2011.

Harrison "has devoted her career to studying energetic phenomena in the Universe, including massive black holes and stellar explosions, and developing advanced instrumentation for focusing and detection of X-rays and gamma-rays," notes U.S. News. She is a recipient of a NASA Graduate Student Research Fellowship and winner of the Robert A. Millikan Prize Fellowship in Experimental Physics, and was awarded a Presidential Early Career Award for Scientists and Engineers by President Clinton. She joined the faculty of Caltech in 1995.

"It is an honor to be recognized among such a diverse and distinguished group of people," says Harrison.

"Most aspiring scientists don't focus on leadership as a quality necessary to accomplish their research," she adds. "As experiments and projects get larger and more complex, however, good leadership is often necessary in order to make progress. For me, creating and motivating an effective team were skills I learned in order to make the science I am passionate about happen."

In a collaborative effort between U.S. News and Harvard's CPL, the leaders were selected by a nonpartisan and independent committee, convened and organized by the center, without the participation of U.S. News editors. The selection criteria used by the committee in choosing the honorees included the ability to set direction, achieve results, and cultivate a culture of growth.

"Even though Americans have lost confidence in current leadership, over the past year they have had unique opportunities to observe and debate the qualities of strong leaders," says Brian Kelly, editor of U.S. News & World Report. "With our Best Leaders issue, we widen the lens to examine people who are showing leadership in unexpected ways across a wide variety of fields."

Other honorees include Lance Armstrong, founder of the Lance Armstrong Foundation; Herbie Hancock, chairman of the Thelonious Monk Institute of Jazz Performance Arts; Marian Wright Edelman, founder and president of the Children's Defense Fund; Anthony Fauci, director of the National Institute for Allergy and Infectious Disease; Robert Gates, U.S. Secretary of Defense; and Steven Spielberg, director and producer, and founder of the Shoah Foundation. 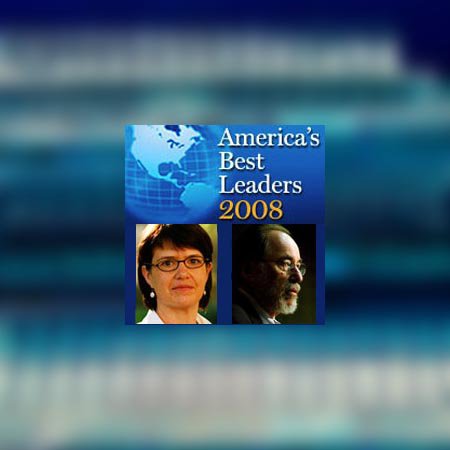